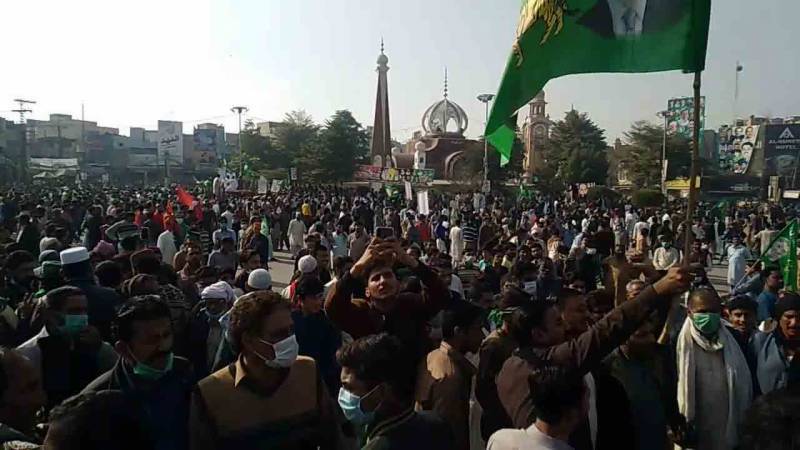 Addressing the rally PML-N vice president Maryam Nawaz said that the people of Multan have turned the streets and the neighbourhoods of the city into the jalsa venue because the rally venue (Qilla Kohna Qasim Bagh) was sealed.

The PML-N vice-president said that when the country faces a threat, then its daughters and mothers come out on the streets to save it.

Maryam also greeted Aseefa warmly, who made her debut at the PDM rally.

The PML-N leader said that she salutes the people of Multan, who remained steadfast despite facing immense resistance from the government.

“When our unarmed workers were persecuted because of the rally, they turned every street into a rally ground,” she said.

Maryam said that she feels for the people of the nation facing skyrocketing electricity and gas prices as well as unemployment.

The PML-N leader also criticized the Pakistan Tehreek-e-Insaf (PTI) for its policy on the global pandemic.

“The rulers are so cowardly that they are hiding their incompetence behind coronavirus,” She said.

Maryam demanded that the government answer which virus has infected the country’s development, employment, justice system and provision of wheat and sugar.

While criticizing the premier, the PML-N leader said the biggest virus in Pakistan is Imran Khan himself, the people of Pakistan will remember him not as a Prime Minister but as Covid-18.

In her maiden public address, daughter of late premier Benazir Bhutto, Aseefa Bhutto-Zardari said the people of the country have decided that the “selected government” will have to go now.

The PPP leader came in Multan on behalf of her brother and party chairman Bilawal Bhutto-Zardari, who went into isolation after contracting COVID-19 last week.

Aseefa said they think that we are afraid of arrests. "If they arrest our brothers, then they should know that every woman of PPP is ready to take up the struggle," she said.

Addressing the gathering at the end of the rally, JUI-F chief and head of PDM, Maulana Fazlur Rehman said though the government had warned PDM against holding a public meeting, the PDM alliance had scared the administration off by "merely waving a baton".

He was referring to a press conference by PDM leaders yesterday, where they had vowed to hold a public meeting come what may.

He told the participants of the rally to be prepared for the next PDM rally, which will be held in Lahore.

Earlier, the PDM had announced to hold the public rally at Multan’s Qilla Kohna Qasim Bagh but the Multan administration rejected the application to stage the public gathering owing to increasing virus cases in the second wave of the COVID-19 in the country.

On Sunday, the administration took control of Qila Kohna Qasim Bagh stadium again besides arresting PDM leaders and workers belonging to different political parties including the son of ex-premier Yousaf Raza Gillani after they stormed into the venue.

Addressing a press conference in Multan on Sunday, Maulana Fazlur Rahman and other PDM leaders vowed to hold public rally in Multan at any cost.