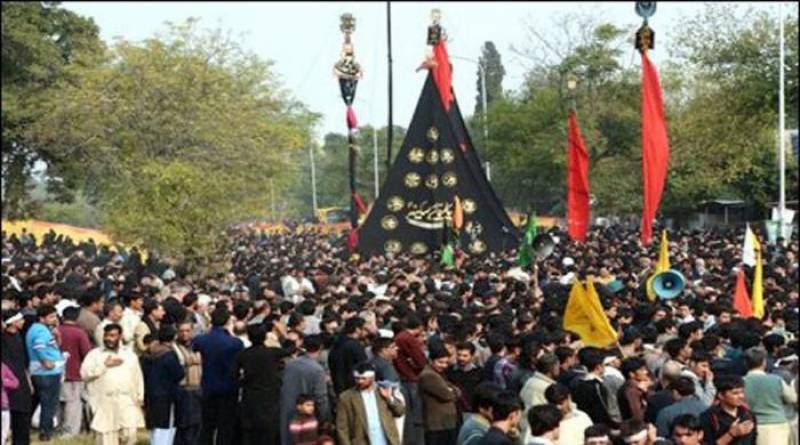 Karachi (Staff Report/Agencies): The Chehlum of Hazrat Imam Hussain (RA) and his companions observed across the country on Tuesday with religious solemnity and spirit.

Processions took out and congregations also held in every major city of the country to remember the sacrifice of Imam Hussain (RA) and his companions.

The Chehlum marks the 40th day after the martyrdom anniversary of Imam Hussein and his 72 companions in Karbala by Yazidi soldiers in 61 A.H.

Foolproof security arrangements were made for the processions to avoid any untoward incident.

In Karachi, the main mourning procession took out from Nishter Park and conclude at Hussainia Iranian Imambargah Kharadar whereas numbers of the small procession joined it from different areas of the city.

Mobile phone services also remain suspended in some areas as part of regular security measures on the occasion while pillion riding was also banned in Karachi and other cities across Sindh province for five days from October 28 to November 2.

Roads leading to the route of the central procession were closed with containers while heavy contingent comprising police, Rangers and other security officials were deputed along the route.

The roads and streets leading to MA Jinnah Road, the route of the central procession, were blocked with containers and barbed wires from Numaish Chowrangi to Tower to provide security to the mourners.

Inspector General of Police (IGP) Sindh Dr Kaleem Imam had ordered all police DIGs to use available resources to ensure foolproof security for the mourning processions and congregations all districts of the Sindh province.

Meanwhile, security was beefed up for the Chehlum processions and congregations in other major cities including Lahore, Faisalabad, Multan, and Rawalpindi.