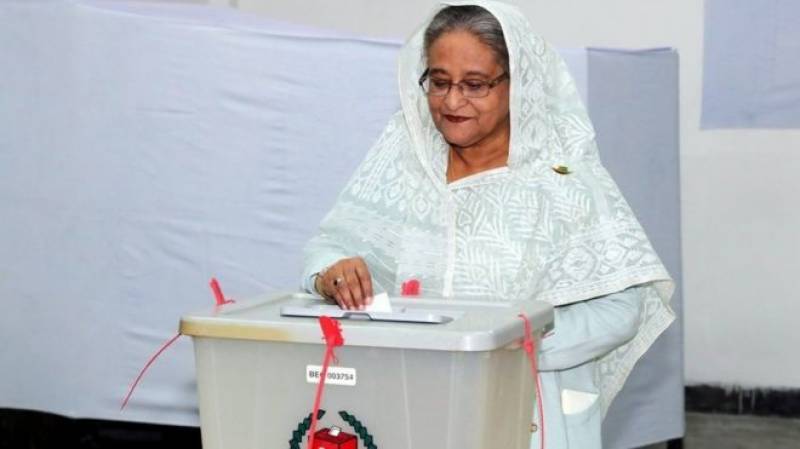 Her ruling party and its allies have won 288 of the 300 parliamentary seats contested, surpassing its previous election wins, BBC reported.

The opposition has condemned the vote as "farcical," marred by violence, intimidation and vote rigging claims.

They won just seven seats and have demanded a new vote.

Bangladesh's parliament has 350 seats in total, 50 of which are reserved for women and allotted proportional to the overall vote.

Sheikh Hasina's Awami League has run Bangladesh since 2009, but one of the leading opposition parties has accused it of using stuffed ballot boxes.

"We urge the election commission to void this farcical result immediately," opposition leader Kamal Hossain said. "We are demanding that a fresh election is held under a neutral government as early as possible."

A spokesman for the Bangladesh National Party (BNP) alleged there were "irregularities" in 221 of the 300 seats being contested.

Hasina, who has headed the AL since 1981, went into the polls on the back of a decade of impressive GDP growth and booming garment exports. Bangladesh is the world's second-largest exporter of garments after China.

The 71-year-old leader is set for a record fourth term in office in the South Asian Muslim-majority nation of 160 million.

PM telephones his Bangladeshi counterpart ahead of her India visit