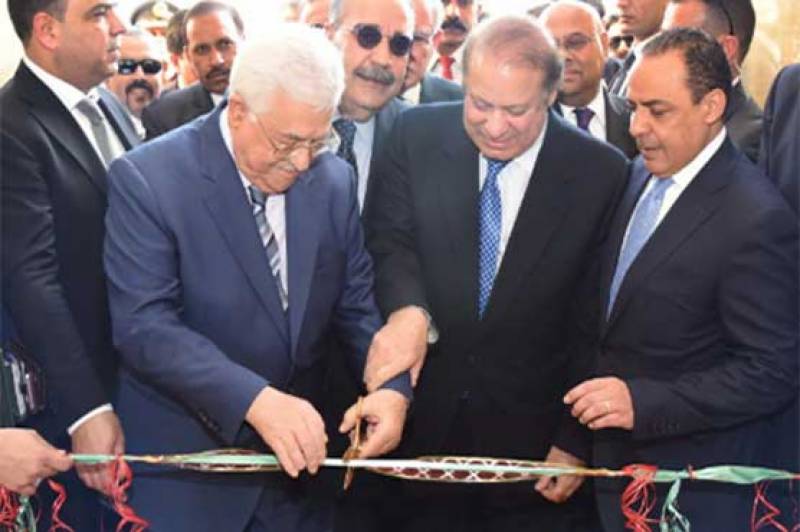 ISLAMABAD: The two countries with historic relations Pakistan and Palestine are age old allies. From 1971 to onwards the ties have strengthened a lot. Palestinian embassy has been working at Islamabad for many years but a today President of the State of Palestine Mahmoud Abbas along with PM Nawaz Sharif has inaugurated Palestinian Embassy in Islamabad.

Speaking at a joint press stakeout with President Mahmoud Abbas after their talks, Prime Minister Nawaz Sharif said ensuring peace in the Middle East cannot be achieved without just settlement of the Palestine-Israeli dispute.

The prime minister called for implementation of the relevant UN Security Council resolutions calling for withdrawal of Israeli forces from occupied territory.

He said establishment of a viable, independent and contagious state of Palestine with pre-1969 borders and Al-Quds Al-Sharif as its capital is only guarantee for sustainable peace in the region.

He said Pakistan is firm in its support for the just cause of Palestinian people.

Mian Nawaz Sharif referred to the newly constructed Palestinian embassy building in Islamabad and said the project would be a symbol of our brotherly relations.

President of Palestine Mahmoud Abbas thanked Pakistan for its steadfast support for the cause of Palestinian people besides financial assistance and scholarships for Palestinian students in Pakistani universities.

Mr. Mahmoud Abbas said he briefed the Prime Minister of Pakistan on the latest developments in respect of Middle East crisis including Israeli settlements and the US decision to shift its embassy to Jerusalem.

He said the two sides also exchanged views on regional issues and the challenge of terrorism.

National anthems of the two countries were played on the occasion. A smartly turned out contingent of the armed forces presented salute and guard of honour to the Palestinian President.