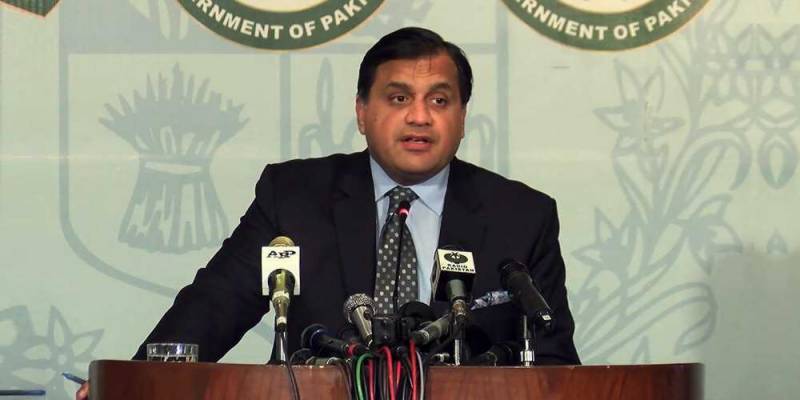 Faisal said that Foreign Secretary Tehmina Janjua summoned Indian High Commissioner in Islamabad on Thursday and lodged protest with him over late night summoning of our high commissioner.

“The FO has Urged India to stop anti-Pakistan rhetoric, and they should instead "concentrate on their election and confine its electoral politics to their own country”, Dr Faisal said.

Responding to a question regarding Afghan peace talks, the FO spokesperson said that Pakistan has on the request of the US and Afghanistan facilitated the Afghan peace process and dialogue with the Taliban as a shared responsibility for peace in the region.

He said there are certain actors who want perpetual conflict in the region for their vested interests but Pakistan urges United States, Afghanistan and Taliban to remain watchful of these detracting elements who are trying to undermine the nascent peace process.

To another question, Dr Muhammad Faisal said the announcement by PM Imran Khan of ‘round the clock’ opening of the Torkham border was a major step to promote bilateral trade and people to people contacts with Afghanistan.

“Pakistan has always emphasized the need for deepening bilateral relations with Afghanistan”. the spokesperson said.

To a question regarding Director of US Intelligence Daniel Coats` remarks about Pakistan in the context of terrorism, Dr Faisal said we have raised the issue with the US side that such controversial statements will be counterproductive and have the potential to adversely affect the peace and stability of the region.

He said Pakistan has played an exemplary role in war against terrorism rendering immense sacrifices.

Dr Faisal said Pakistan continues to play its constructive role for stabilizing the region and its efforts are being highly acknowledged by the US leadership.