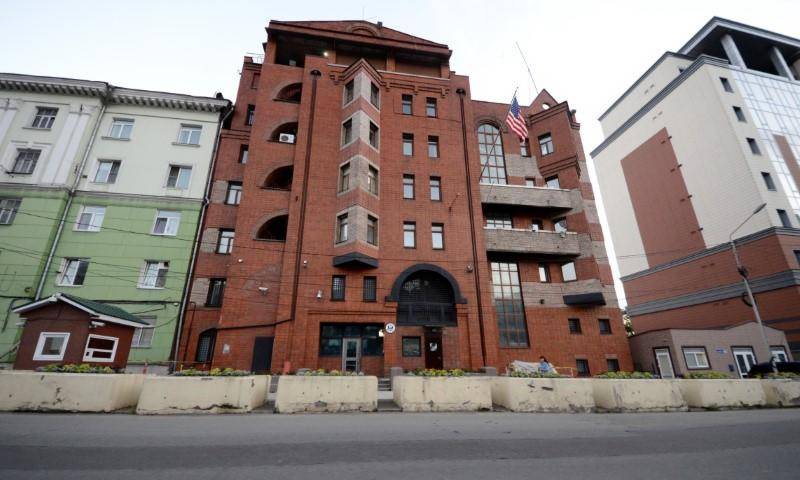 Moscow (Reuters): The United States can include its local employees among the 755 diplomatic staff it must cut in Russia, a Kremlin spokesman said on Monday, tempering the impact of an ultimatum issued by Russian President Vladimir Putin.

The clarification from the Kremlin means that there will not necessarily be a mass expulsion of US diplomats as part of Moscow's retaliation for new sanctions that are to be imposed on Russia by the United States.

The vast majority of the United States' roughly 1,200 embassy and consulate staff in Russia are Russian citizens. Reducing their numbers will affect embassy and consular operations, but that step does not carry the same diplomatic impact as expelling US diplomats from the country.

Still, slashing the US embassy and consular staff by about 60 percent amounts to the most dramatic diplomatic demarche between the two countries since the Cold War.

Commenting on which diplomatic staff would have to go, Kremlin spokesman Dmitry Peskov told reporters on a conference call: "That's the choice of the United States."

"(It's) diplomats and technical employees. That is, we're not talking purely about diplomats - obviously, there isn't that number of diplomats - but about people with non-diplomatic status, and people hired locally, and Russian citizens who work there," he said.

As of 2013, the US mission in Russia, including the Moscow embassy and consulates in St Petersburg, Yekaterinburg and Vladivostok, employed 1,279 staff, according to a State Department Inspector General's report that year. That included 934 "locally employed" staff and 301 US "direct-hire" staff.

Forcing the United States to scale back its diplomatic presence will reinforce Putin's reputation at home as a resolute defender of Russia's interests. That will help burnish his image before next year's presidential election, when he is expected to seek another term.

But the consequences of the Russian retaliation are not so stark that it would permanently alienate US President Donald Trump, according to Alexander Baunov, a senior fellow at the Moscow Carnegie Center, a think tank.

By announcing his counter-measures before Trump signed the sanctions legislation into law, "Putin is sending a message that he is punishing Congress's America, and not Trump's America," Baunov wrote in a Facebook post. "(Putin) has taken Trump out of the direct line of fire and spared his ego."