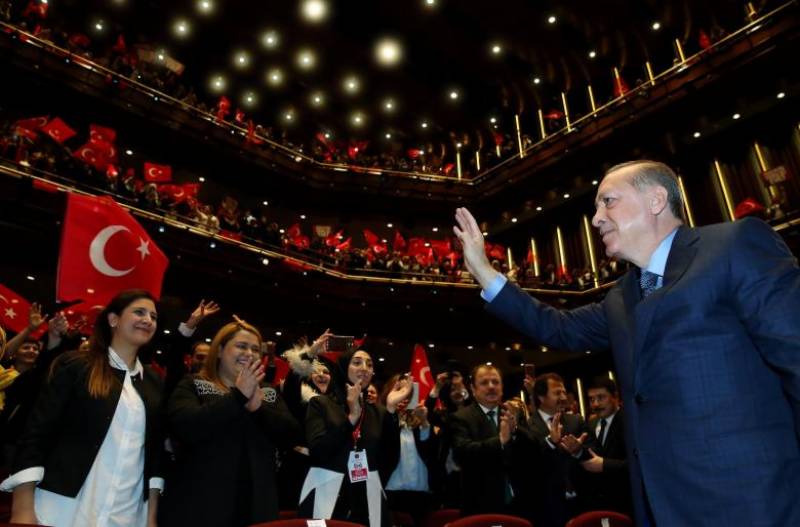 Ankara/Istanbul, Turkey (Reuters): Less than three weeks before Turkey votes on sweeping new powers sought by President Tayyip Erdogan, opinion polls suggest a tight race in a referendum that could bring the biggest change to the system of governance in the country's modern history.

Two senior officials from the ruling AK Party told Reuters that research it commissioned had put support for "yes" at 52 percent in early March, down from 55-56 percent a month earlier, though they expected a row with Europe in recent weeks to have fired up nationalists and bolstered their camp.

Turks will vote on April 16 on constitutional changes which would replace their parliamentary system with an executive presidency, a change Erdogan says is needed to avoid the fragile coalition governments of the past and to give Turkey stability as it faces numerous security challenges.

Publicly-available polls paint a mixed picture in a race that has sharply divided the country, with Erdogan's faithful seeing a chance to cement his place as modern Turkey's most important leader, and his opponents fearing one-man rule.

A survey on Wednesday by pollster ORC, seen as close to the government, put "yes" on 55.4 percent in research carried out from March 24 to 27 across almost half of Turkey's 81 provinces.

By contrast, Murat Gezici, whose Gezici polling company tends to show stronger support for the opposition, told Reuters none of the 16 polls his firm had carried out over the past eight months had put the "yes" vote ahead. He expected a "no" victory of between 51-53 percent, based on his latest numbers.

None of the polls suggest the 60 percent level of support which officials in Ankara say Erdogan wants.

AKP spokesman Yasin Aktay said, "Right now we have not seen a result in our polls that did not show the 'yes' vote ahead. But we want the constitutional reform to be approved with a high percentage for wider social consensus."

The wide disparity of the poll results is partly due to the political sympathies of Turkey's polling companies.

But it also reflects a sense that a section of the public remains undecided, including some AKP loyalists uncomfortable with too much power being concentrated in Erdogan's hands.

But former Prime Minister Ahmet Davutoglu and former president Abdullah Gul, both high-profile members of the AKP who fell out with Erdogan, did not show up and were also absent from the AKP's campaign launch in late February.

Erdogan assumed the presidency, currently a largely ceremonial position, in 2014 after more than a decade as prime minister with the AKP, which he co-founded. Since then, pushing his powers to the limit, he has continued to dominate politics by dint of his personal popularity and forceful personality.

Critics accuse him of increasing authoritarianism with the arrests and dismissal of tens of thousands of judges, police, military officers, journalists and academics since a failed military coup in July.

With the constitutional overhaul, the president would be able to retain ties to a political party, potentially allowing Erdogan to resume his leadership of the AKP, a move that opposition parties say would wreck any chance of impartiality.

Abdulkadir Selvi, a pro-government columnist in the Hurriyet newspaper, said the latest numbers presented to the AKP headquarters showed the lead for the "yes" campaign widening, boosted partly by Erdogan's row with Europe.

Bans on some campaign rallies by Turkish officials in Germany and the Netherlands have prompted Erdogan to accuse European leaders of "Nazi methods".

Selvi wrote on Thursday, "The stance of the Netherlands and Germany is expected to motivate nationalist voters at home and abroad and add 1-1.5 percentage points to the 'yes' vote."

The constitutional changes envisage presidential and parliamentary elections being held together in 2019, with a president eligible to then serve a maximum of two five-year terms. Those elections could be called early if Erdogan wins the referendum, enabling him to assume full executive powers sooner.

But AKP officials said such a move was unlikely, citing concern that a slowing economy could weaken their parliamentary majority and pointing to voter fatigue after four elections in the past three years.

A senior AKP official said, "Whether there is a 'Yes' or 'No' vote in the referendum, leaving this parliamentary majority to have another election does not make sense for us."