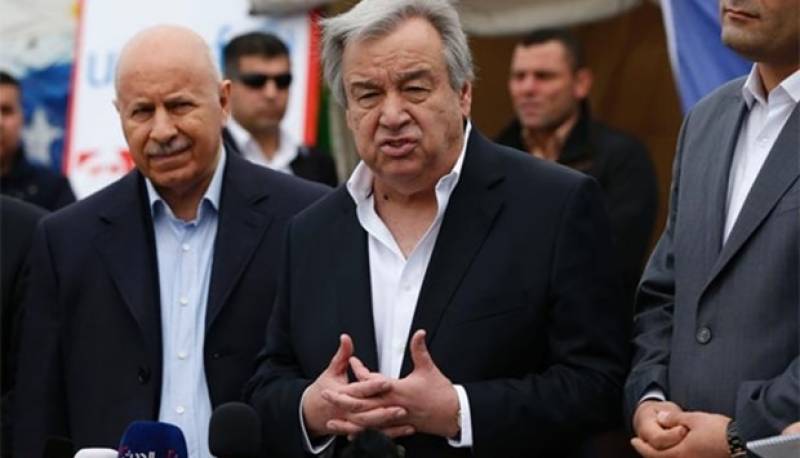 Iraqi forces have seized back most of the country's second-largest city from the Sunni hardline group in a massive six-month campaign.

But at least 355,000 residents have fled fighting, according to the government, and some 400,000 civilians remain trapped inside the densely-populated Old City where street battles have raged for weeks.

"We don't have the resources necessary to support these people," Guterres told reporters during a visit to the Hassan Sham Camp, one of several centers outside Mosul packed with civilians escaping the fighting.

The U.N. and Iraqi authorities have been building more camps but struggle to accommodate new arrivals with two families sometimes having to share one tent.

"Unfortunately our program is only 8 percent funded," he said, referring to a 2017 U.N. humanitarian response program without giving additional details.

During his visit, which lasted about half an hour, residents complained to Guterres about the quality of drinking water and poor living conditions in tents frequented by mice and insects.

"We want to go back to our villages. We are fed up," said Saqr Younis, who fled to Mosul when Islamic State arrived in his village in 2014.

"If we had died by bombardment it would have been more merciful," said Saqr who has been in the camp for four months.

Many of the displaced have returned to their homes in areas retaken from Islamic State but some, like Saqr, have not yet been allowed to return by the authorities.

The Sunni group overran about a third of Iraq in 2014, benefiting from the Sunni-Shi'ite rift that weakened the army.

Iraqi forces have won back control of most cities that fell to the group and the militants have been dislodged from nearly three quarters of Mosul but remain in control of its center.

Government positions have reached as close as 500 meters to the al-Nuri Mosque, from where Islamic State leader Abu Bakr al-Baghdadi declared a caliphate spanning parts of Iraq and Syria in July 2014.

Baghdadi and other IS leaders are believed to have left the city but U.S. officials estimate around 2,000 fighters remain inside the city, resisting with snipers hiding among the population, car bombs and suicide trucks targeting Iraqi positions.