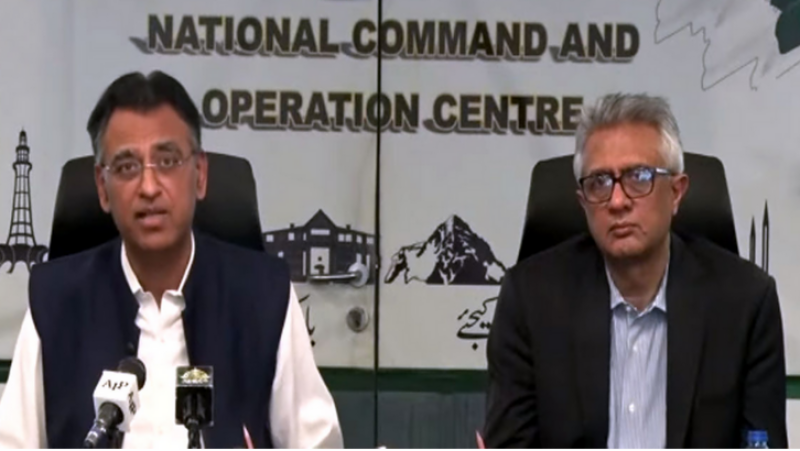 Islamabad (Web Desk): National Command and Operation Center (NCOC) on ended its operations on Thursday amid all time low COVID-19 indicators and high level of vaccination across Pakistan.

This was announced by Minister for Planning, Development and Special Initiatives Asad Umar, who also has been the chairman of the NCOC.

Addressing a press conference in Islamabad here along with Special Assistant to Prime Minister (SAPM) on Health Dr Faisal Sultan, Asad Umar said that keeping in view the lowest level of the pandemic expansion and the highest level of vaccination across the country, the government had decided to close down the Center passing on the baton to the health ministry.

"Today is the last day of NCOC as we have now learned to live along with the pandemic, the minister said.

He said that chairing the forum during last 2 years and working with the most dedicated team had been the greatest privilege and honour of his life.

"It makes me immensely proud as a Pakistani that the country received praise for its Covid response as one of the most successful in the world from global agencies and personalities,” he said adding that with Allah’s mercy and support of the entire nation, we have been able to overcome this unprecedented challenge.

Asad specifically thanked the nation for cooperating with the government by acting upon the Standard Operating Procedures (SOPs) issued by the government to control the pandemic and successfully overcoming this challenge.

He also thanked all the stakeholders involved in this whole operation including the federal and provincial health departments, Pakistan Army, the NDMA team for providing logistics to the hospitals, the civil bureaucracy, Judiciary, media, religious scholars, and the business community.

The minister said almost all the ministries and all the provincial governments were involved in the operation who worked together to successfully manage the challenge.

The minister said that Dr Faisal Sultan and his team also played major role to control the pandemic. Besides he said the front line health workers were also the real heroes who put their lives at threat to save the people from the pandemic.

"Above all, the real character and the mastermind of the success story was Prime Minister Imran Khan who from day one directed to keep balance between the lives and the livelihoods and this smart approach helped saving the people from dying of the pandemic as well as of hunger," Asad Umar concluded.

Meanwhile, Prime Minister Imran Khan has congratulated the NCOC for a professional and nationally coordinated response to COVID-19 pandemic.

In a post on Twitter, the premier said that our Covid response was recognized by the international agencies and people in the field as one of the most successful globally.