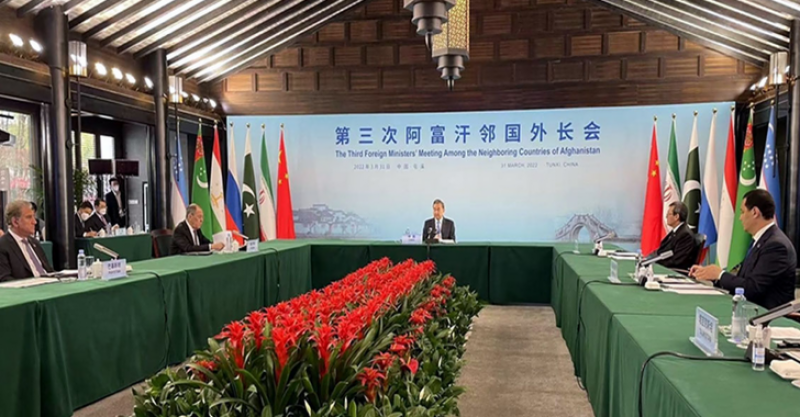 Beijing (Agencies): The neighboring countries of Afghanistan have expressed readiness to provide further humanitarian assistance to the people of Afghanistan.

According to the joint statement issued after Foreign Ministers' Meeting among the Neighboring Countries of Afghanistan at Tunxi, Anhui Province in China on Thursday, the countries expressed deep concern over the humanitarian situation, economic and livelihood plight in Afghanistan.

The participating parties called on the international community in particular the UN agencies and relevant members of the UN Security Council to step up emergency humanitarian assistance to the people of Afghanistan.

The joint statement urged the countries mainly responsible for the current predicament in Afghanistan to earnestly fulfill commitments on the economic recovery and future development of Afghanistan.

It stressed that a peaceful, stable and prosperous Afghanistan serves the common interests of regional countries and Afghanistan, and expressed readiness to jointly play a constructive role to this end.

They reaffirmed commitment to include Afghanistan in the regional connectivity, energy and transport networks, economic and trade systems, in order to help it unleash its geographical advantages and economic potential.

The parties noted commitments and pledges made by Afghanistan to the international community that the territory of Afghanistan will not pose any threats to the neighboring countries and no place will be given to terrorist groups on the Afghan territory.

They condemned all forms of violence and terrorist attacks, and reiterated that ISIS, Al-Qaeda, ETIM, TTP, BLA, Jondollah, Jaish-Al-Adl, Jamaat Ansarullah, IMU and other terrorist organizations must not be given any place on the Afghan territory.

They reaffirmed readiness to strengthen counter-terrorism and security cooperation among neighboring countries and build a united front against terrorism.