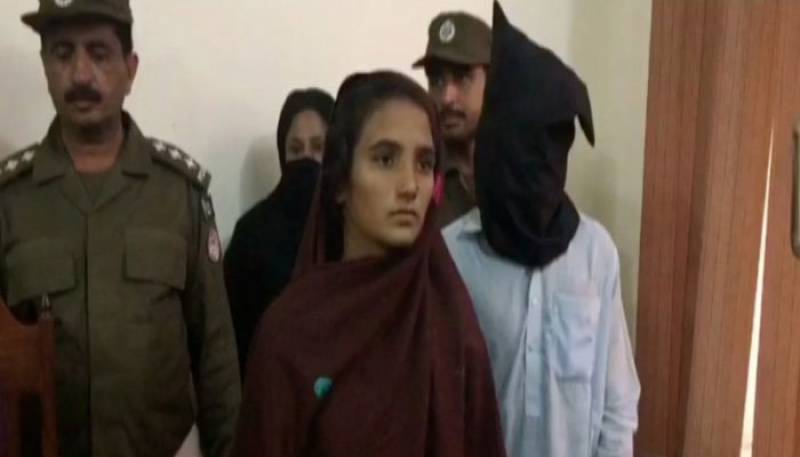 Muzaffargarh (Staff Report): A woman detained on Monday in Lashariwala for killing 13 family members of in-laws for domestic issue.

According to details, provide by Dera Ghazi Khan Regional Police Officer (RPO) Sohail Tajak, police arrested the woman and her two accomplices for allegedly spiking lassi with rat killing pills resulting in the death of 13 people of her family.

The police presented suspects Asia Bibi, her friend Shahid and relative Zareena at the briefing.

District Police Officer Awais Ahmad said a case under the Anti-Terrorism Act had been registered against Asia and her accomplices.

Police has formed a special team to probe into the death of 13 family members of Akram Lashari, of Mauza Kundai, in Seetpur. The police arrested the three who have confessed to committing the crime.

Asia Bibi was not happy with her marriage to her cousin, Amjad, the son of Akram Lashari, the RPO said.

During her 45-day marriage, she quarrelled with her husband and in-laws several times and left her house for her parents.

Police reported that Asia with Shahid and Zareena made a plan to kill her husband Amjad and other family members. On Oct 26, she put the poisonous tablets in the curd pot. During lunch, she served the spiked drink to the family members and 19 people fell unconscious one by one. They were shifted to the Nishtar Hospital in Multan and the Dera Ghazi Khan Teaching Hospital where 13, including Amjad, have died while six others are still under treatment.

The Kundaie area has been under mourning since Oct 26; local residents have buried the dead on a self-help basis whereas the district government failed to announce any financial assistance despite its earlier announcement. Only Rs50,000 were given to the heirs for burial arrangements.