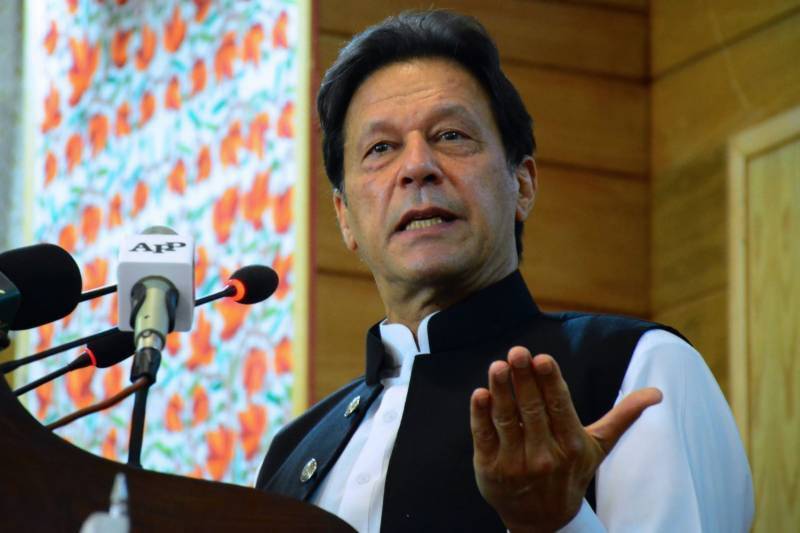 Islamabad (Web Desk): Prime Minister Imran Khan has said that Pakistan expects from the United States (US) an even-handed treatment with respect to India, especially on the Kashmir dispute.

In an interview with a German magazine in Islamabad, the premier said the South Asian region is a hot-spot and it could flare up at any time.

PM Imran said the US thinks that India will contain China which is a completely flawed premise.

“India is a threat to its neighbours, including China, Bangladesh, Sri Lanka and Pakistan,” he said.

Khan maintained that India has currently the most extremist and racist government in the subcontinent, inspired by the Nazis of 1920s and 30s.

Lauding China, the premier said that what the country has achieved in 40 years is remarkable.

“I admire China because they have taken 700 million people out of poverty within the short period of 40 years,” he said adding that this was the model he wanted to emulate in Pakistan.

To a question if Washington had forced Pakistan into a misguided war in neighboring Afghanistan, he said “Pakistan had nothing to do with the terror attacks on 9/11 as Al-Qaida was in Afghanistan.”

“After 9/11, we should not have allowed our army to become involved in the war. I opposed it from day one. The US put pressure on us, and the military dictator Pervez Musharraf succumbed to that pressure,” he said.

He said from day one, his government had been fostering dialogue to resume peace in Afghanistan.

Khan mentioned that Pakistan lost 70,000 people in this conflict, and the tribal areas adjacent to the Afghan border were devastated in the last 15 years.

PM Imran said that Pakistan has no favorite among the hopefuls of power in Afghanistan. Our only interest is that the future government in Kabul does not allow India to operate from there against Pakistan, he added.

Responding to a question regarding Pakistan’s successful strategy during coronavirus pandemic, he said with smart lockdown, the government did not stop agriculture sector and quickly reopened the construction sector, because that’s what employed the most people in the urban areas.

India and Iran, he said, restricted people to their homes in poor areas with complete lockdown imposed

“Around 180,000 to 200,000 people in the country were getting tested every week and mentioned that the national coordination team had a very clear composite picture of the epidemic,” he said.

The PM noted that from peak numbers in June the country saw a steady decline in cases, positivity and deaths across the country until late August. He expressed hope to survive the second wave.

On Pakistan’s offer for mediation on Middle East situation, he said soon after assuming power, he had offered Saudi Arabia and Iran to mediate in Yemen. “But you can´t force anybody to agree on peace talks if they don´t want to,” he said.

On United Arab Emirates, Bahrain and Sudan having established relations with Israel, he said every country had its own foreign policy, however said “unless there’s a just settlement, we cannot recognize Israel”.

Responding to a question Imran Khan said countries did not become poor because of a lack of resources, but due to corruption among the leadership.

As we know from the Panama Papers, the same is true for Pakistani politicians, he said adding that millions of dollars went into properties in the most expensive areas in London, siphoned off from this country.

“They want to blackmail me into getting them off the corruption cases. But there’s no way I will ever relent,” PM Imran Khan said.