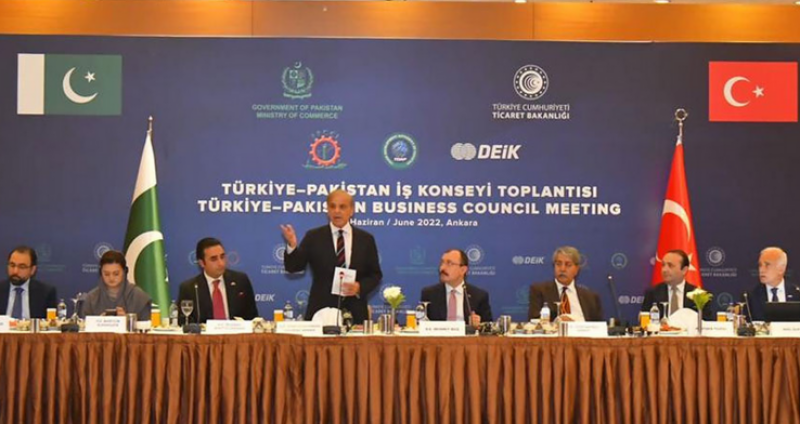 Addressing at the Pakistan Turkey Business Council under the DEIK – Foreign Economic Relations Board, the premier invited the Turkish investors to explore Pakistan’s diverse sectors, particularly the energy sector offering immense opportunities and scope for development.

PM Shehbaz said that both the countries have also immense opportunities of cooperation in Textile industry and a joint strategy in this regard will further boost the industry.

"Both the countries have supported each other in critical times especially during earthquake, flood and other natural disasters," the premier said, adding that through a joint adventure, the two countries can rapidly move to the path of development and prosperity.

Shehbaz Sharif said the government is taking effective steps to meet the current economic challenges being face by Pakistan.

He also invited Turkish investors to invest in Pakistan in the fields of hydro, solar and wind power projects.

He said that Pakistan will be capable to produce 40,000 megawatt hydroelectricity after construction of dams in the country.

The prime minister said that Pakistan wants to take the benefits from Turkish capabilities in diverse sectors as it has immense experience in construction of dams, production of cheaper electricity and manufacturing vehicles.

PM Shehbaz said that Turkish investments in the country will also lead to profit to their business community besides development of Pakistan.

Foreign Minister Bilawal Bhutto Zardari and other members of Pakistani delegation were also present for the meeting.

Both sides discussed ways to strengthen bilateral ties between Pakistan and Turkey, the Radio Pakistan reported.

PM Shehbaz said the historical and brotherly relations between Pakistan and Turkey were witnessing a new dimension leading to the progress of the two nations.

The premier said Pakistan and Turkey had a similarity of views on international issues and the people of the two countries stood by each other in difficult times.

He said there was a strong relationship of mutual trust and respect between Pakistan and Turkey, which had turned into strong economic relations.

Shehbaz said Turkey made rapid progress under the leadership of President Recep Tayyip Erdogan, terming it a role model for other nations.

The Turkish foreign minister said Turkey and Pakistan had deep-rooted relations and expressed his government’s desire to strengthen ties in multifarious areas.

Prime Minister Shehbaz Sharif is in Turkey on a three-day visit from May 31 to June 2.