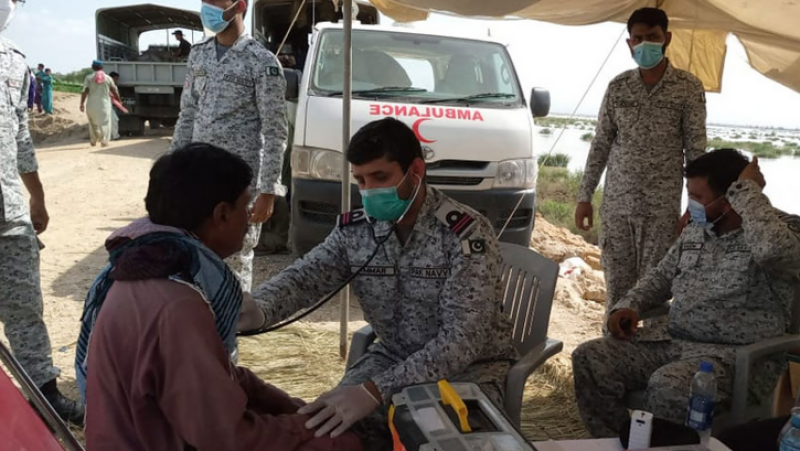 According to a statement issued by the Inter-Services Public Relations (ISPR) on Friday, 200 helicopter sorties have been flown in various areas of Pakistan to evacuate stranded people and also transport ration and medicines.

During the last 24 hours, 1991 stranded individuals were evacuated and 162.6 tons of relief items were delivered by Pakistan Army to the flood-affected people.

So far, 50,000 individuals have been shifted to safer locations from calamity hit areas.

147 relief camps are functional round the clock in flood-affected areas of Sindh, Southern Punjab, Balochistan and Khyber Pakhtunkhwa (KP). More than 60,000 patients have been treated.

In a statement, a spokesperson of Pakistan Navy said that supply of essential commodities to the flood victims in Dera Ismail Khan, Rajanpur and Sindh is being ensured through continued air and land operation.

The spokesperson added that marooned people in different areas have also been rescued and shifted to safer locations by Pakistan Navy.

Moreover, the PAF is also actively participating in relief operations in flood-hit areas of the country.

PAF is reaching out to the needy families whose houses have been damaged in the natural calamity.