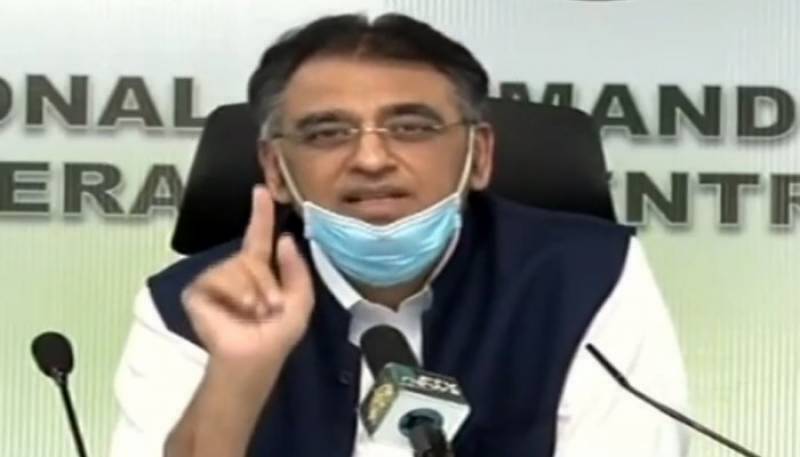 Islamabad (Web Desk): Federal Minister for Planning and Development Asad Umar, who also heads the National Command and Operation Centre (NCOC), said on Tuesday that the target of one million-COVID-19 vaccinations in a day has been achieved.

In his tweets on Tuesday, the minister said that one million and seventy two thousand vaccinations were carried out on Monday.

He commended the performance of all the federating units to achieve this milestone.

Asad Umar said that Islamabad has become the first city in Pakistan with a population of one million or more to get 50% of its eligible population vaccinated with at least one dose.

Happy to report that the target we had set for 1 million vaccinations in a day was crossed yesterday with 10 lakh 72 thousand vaccinations. All federating entities contributed with punjab, sind, kp and Islamabad all doing record numbers. Amazing performance by all involved

As per the data from Johns Hopkins University, Pakistan is at the 17th position of doses administered among the nations vaccinating their citizens.

Kudos to all who hv made this happn pic.twitter.com/Fq1u4teCyI

On the other hand, the number of confirmed COVID-19 cases in Pakistan rose to 1,043,277 on Tuesday after 3,582 new coronavirus cases surfaced in the country during the last 24 hours.

The NCOC data reveals that 49,798 tests were conducted in last 24 hours while positivity ratio remained 7.19%.

According to the government's COVID-19 portal, the death toll related to coronavirus has reached to 23,529 with 67 fatalities reported during the last 24 hours.

Over the last twenty four hours, total number of recovered COVID-19 patients across the country reached 944,375 after another 1,355 virus recoveries were reported.