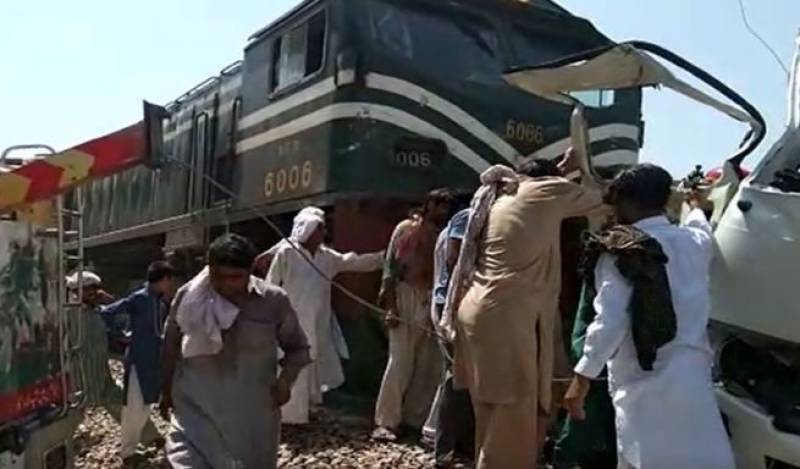 Lahore (Web Desk): Twenty-two people, including 20 Sikh pilgrims, a driver and his helper, died and several others injured when a passenger coach rammed into Shah Hussain Express train in Sheikhupura on Friday.

According to details, the Lahore-bound Shah Hussain Express train crashed into the vehicle carrying Sikh yatrees as it attempted to cross an unmanned railway crossing near crossing near Sacha Soda in Sheikhupura.

The railway and district rescue teams arrived at the scene and completed rescue operation. The wounded and dead bodies were shifted to Sheikhupura Hospital.

According to district authorities, 22 people, most of them Sikh Yatris and including eight women and a child, were killed while nine pilgrims, including two children, sustained injuries.

As per the sources, the accident apparently took place due to negligence of the driver of the coaster carrying 31 passengers, including 29 Sikh pilgrims.

Federal Minister for Railways Sheikh Rashid ordered immediate action against those responsible for the tragic incident.

Prime Minister Imran Khan expressed profound grief over the loss of precious lives in the train-coach accident in Sheikhupura.

The premier said he was "deeply saddened" to hear of the accident. He extended condolences and prayers to the families of the deceased and directed authorities to provide the best possible medical treatment to the wounded.

President Dr Arif Alvi also expressed grief over the loss of lives, urging officials to provide best facilities to the affectees of the incident.

Chief of Army Staff (COAS) General Qamar Javed Bajwa extended his "condolences to the bereaved families" for the loss of precious lives in the tragic incident, a statement by the military's media wing said. He also prayed for the early recovery of the injured.

Punjab Chief Minister Usman Buzdar also expressed sorrow, saying that his prayers and sympathies are with the families of the victims.

"I extend my most sincere sympathies to the bereaved families on their irreparable loss," he said.

Pakistan Peoples Party (PPP) Chairman Bilawal Bhutto Zardari also expressed his grief over the loss of lives in the tragic incident and extended condolences and prayers to the families of the deceased.