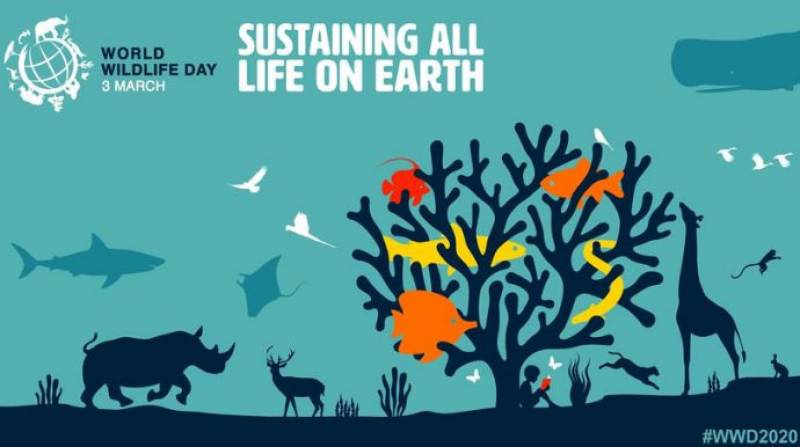 Karachi (Web Desk): World Wildlife Day was observed on Tuesday (March 3) across the globe including Pakistan under the theme "Sustaining all life on Earth”.

This year's theme encompasses all wild animal and plant species as a component of biodiversity.

The Day aims to celebrate the many beautiful and varied forms of wild fauna and flora and to raise awareness of the multitude of benefits that their conservation provides to people.

The animals and plants that live in the wild have an intrinsic value and contribute to the ecological, genetic, social, economic, scientific, educational, cultural, recreational and aesthetic aspects of human well-being and to sustainable development.

It also reminds the urgent need to step up fight against wildlife crime and human-induced reduction of species, which have wide-ranging economic, environmental and social impacts.

In his message on the day, United Nations (UN) Secretary General António Guterres said let us remind ourselves of our duty to preserve and sustainably use the vast variety of life on the planet. Let us push for a more caring, thoughtful and sustainable relationship with nature.

"This is an opportunity to raise urgent awareness about the plight of nature, the plight of wildlife, and what this means for human wellbeing and the planet", she added.

World Wildlife Day is celebrate annually in whole world. On 20 December 2013, at its 68th session, the United Nations General Assembly (UNGA), in its resolution UN 68/205, decided to proclaim 3 March, the day of the adoption of the Convention on International Trade in Endangered Species of Wild Fauna and Flora (CITES) in 1973, as World Wildlife Day, which was proposed by Thailand to celebrate and raise awareness of the world’s wild fauna and flora.

World Wildlife Day is observed to celebrate the varied forms of wild fauna and flora on the planet and to raise awareness regarding the multiple benefits that their conservation provides to people.

The day also aims to encourage people to step up their fight against poaching and other wildlife crimes, which results in many species getting extinct leading to wide-ranging economic, environmental and social impacts.