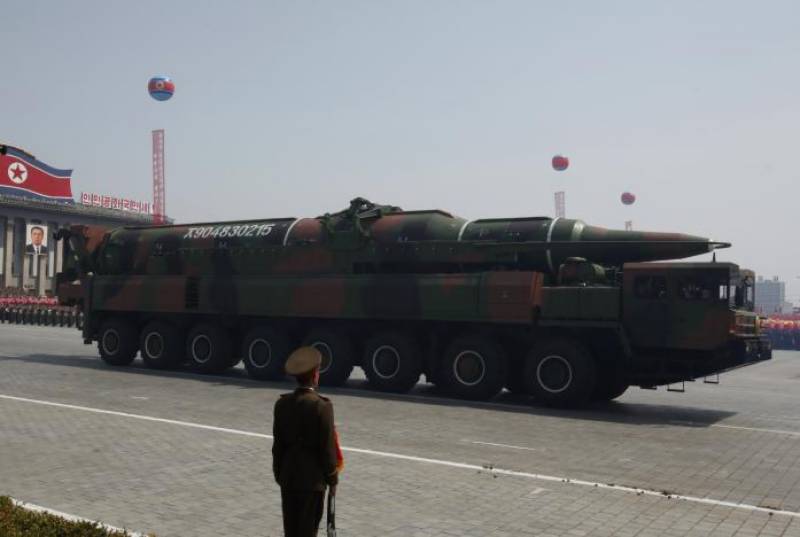 Beijing, China (Reuters): China on Wednesday called on all parties in the Korean standoff to stay calm and "stop irritating each other" a day after North Korea said the United States was pushing the region to the brink of nuclear war.

The United States has urged China, reclusive North Korea's lone major ally, to do more to rein in its neighbor's nuclear and missile programs which have prompted an assertive response from the Trump administration, warning that the "era of strategic patience" is over.

The United States has sent a nuclear-powered aircraft carrier to Korean waters and a pair of strategic U.S. bombers flew training drills with the South Korean and Japanese air forces in another show of strength this week.

Chinese Foreign Ministry spokesman Geng Shuang, asked about the bomber flights, the drills and North Korea's response, stressed that the situation was "highly complex" and sensitive.

"The urgent task is to lower temperatures and resume talks," he told reporters.

"We again urge all relevant parties to remain calm and exercise restraint, stop irritating each other, work hard to create an atmosphere for contact and dialogue between all sides, and seek a return to the correct path of dialogue and negotiation as soon as possible."

The flight of the two bombers came as U.S. President Donald Trump raised eyebrows when he said he would be "honored" to meet North Korean leader Kim Jong Un in the right circumstances, and as his CIA director landed in South Korea for talks.

North Korea said the bombers conducted "a nuclear bomb dropping drill against major objects" in its territory at a time when Trump and "other U.S. warmongers are crying out for making a preemptive nuclear strike" on the North.

"The reckless military provocation is pushing the situation on the Korean peninsula closer to the brink of nuclear war," the North's official KCNA news agency said on Tuesday.

Tension on the Korean peninsula has been high for weeks, driven by concern that the North might conduct its sixth nuclear test in defiance of U.N. Security Council resolutions.

In a telephone call with his Philippine counterpart Rodrigo Duterte, Chinese President Xi Jinping urged all sides to exercise restraint and return to the correct path of talks as soon as possible, state radio reported.

The U.S. military's THAAD anti-missile defense system has reached initial operational capacity in South Korea, U.S. officials told Reuters, although they cautioned that it would not be fully operational for some months.

China has repeatedly expressed its opposition to the system, whose powerful radar it fears could reach inside Chinese territory, just as Trump has praised Chinese President Xi Jinping for his efforts to rein in North Korea.

It was widely feared North Korea could conduct a nuclear test on or around April 15 to celebrate the anniversary of the birth of the North's founding leader, Kim Il Sung, or on April 25, the 85th anniversary of the foundation of its Korean People's Army.

The North has conducted such tests or missile launches to mark significant events in the past.

Instead, North Korea held a big military parade featuring a display of missiles on April 15 and then a large, live-fire artillery drill 10 days later.

Trump drew criticism in Washington on Monday when he said he would be "honored" to meet North Korea's young leader.

"If it would be appropriate for me to meet with him, I would absolutely, I would be honored to do it," Trump told Bloomberg News.

Trump did not say what conditions would be needed for such a meeting to occur or when it could happen.

Trump warned in an interview with Reuters on Thursday that a "major, major conflict" with North Korea was possible, while China said last week the situation on the Korean peninsula could escalate or slip out of control.

Trump has stepped up outreach to allies in Asia to secure their cooperation to pressure North Korea, and over the weekend he spoke with the leaders of Thailand, Singapore and the Philippines in separate phone calls.

The U.S. ambassador to Indonesia, Joseph R. Donovan, told reporters Indonesia was among several countries that the United States was urging take a "fresh look" at their North Korea ties.

He declined to go into details of what action the United States wanted, but said: "We are hoping that countries will look at what they can be doing to bring North Korea around to meaningful steps to end its nuclear and missile programs.”

Trump's calls to the Asian leaders came after North Korea test-launched a missile that appeared to have failed within minutes, its fourth successive failed launch since March. It has conducted two nuclear tests and a series of missile-related activities at an unprecedented pace since the beginning of last year.

The North is technically still at war with the South after their 1950-53 conflict ended in a truce, not a treaty, and it regularly threatens to destroy the United States, Japan and South Korea.

Trump and Russian President Vladimir Putin on Tuesday meanwhile spoke by telephone about Syria and "about how best to resolve the very dangerous situation in North Korea", the White House said.