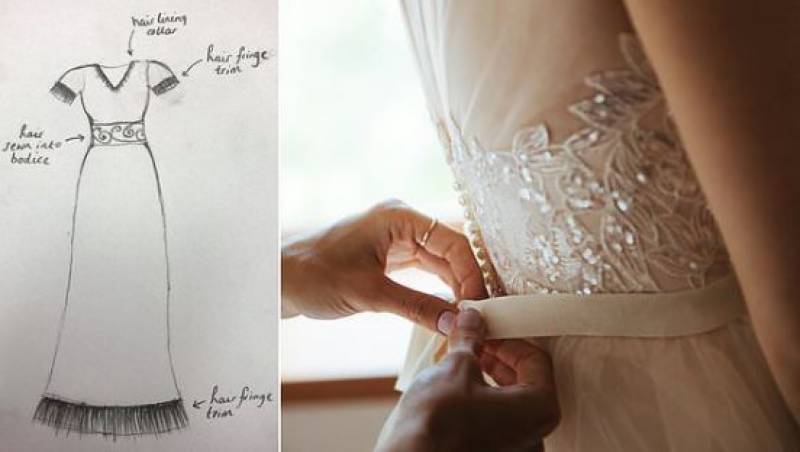 London (Web Desk): A woman from Bristol wants a designer to create a ball gown made from her dead mother’s hair and is willing to pay over $19,000, reported The Independent.

The 61-year-old posted an ad on a fashion design website, Sewport which read, “I’m looking for someone to recreate my mother’s wedding dress from 1953 which she wore when she married my father. She passed away recently and I’d like to create a special memento of her life. I need a specialist as the material I’d like to create it from is quite weird.”

The Bristol resident found out about her mother’s illness in 2014 and started collecting her hair since. She didn’t know why she was doing so, but seems to have found an explanation now.

Her ad includes a sketch of how she wants the dress to look. It needs to have human hair on the collar, sleeves and hem with a pattern around the midriff. The woman hopes for the dress to be ready by August 2019 for her mother’s death anniversary.

Former designer at the Design Museum London Alix Bizet, who earlier made a clothing collection out of hair, shared that the use of human hair as a fibre to create garments is hard. “Hair is full of keratin and does not have the natural bond that wool has such as microscopic hooks that help the material to be stable and strong like in a classical felt,” she said.

The designer empathised with the woman’s decision to choose anonymity and explained, “Using human hair is often perceived as gross and unethical, due to the past history in Europe and its association with cannibalism. However, it’s a highly emotional subject for some people and is closely linked to the identity of a person. It can be almost spiritual.”