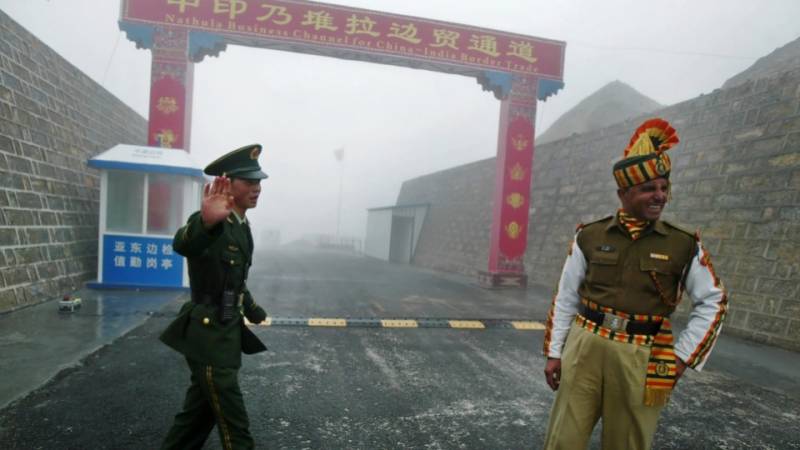 Beijing, China (Reuters): China's Foreign Ministry on Thursday said India has been building up troops and repairing roads along its side of the border amid an increasingly tense stand-off in a remote frontier region beside the Himalayan kingdom of Bhutan.

The stand-off on a plateau next to the mountainous Indian state of Sikkim, which borders China, has ratcheted up tension between the neighbors, who share a 3,500-km (2,175-mile) frontier, large parts of which are disputed.

The foreign ministry said in a statement, "It has already been more than a month since the incident, and India is still not only illegally remaining on Chinese territory, it is also repairing roads in the rear, stocking up supplies, massing a large number of armed personnel."

"This is certainly not for peace."

India has denied any such military buildup and, in a statement to parliament on Thursday evening, Foreign Minister Sushma Swaraj urged dialogue based on a written common understanding regarding the border intersection reached in 2012.

Swaraj said, according to a transcript of her remarks released by her office, "India always believes that peace and tranquility in the India-China border is an important pre-requisite for smooth development of our bilateral relations."

"We will continue to engage with the Chinese side through diplomatic channels to find a mutually acceptable solution."

Early in June, according to the Chinese interpretation of events, Indian guards crossed into China's Donglang region and obstructed work on a road on the plateau.

The two sides' troops then confronted each other close to a valley controlled by China that separates India from its close ally, Bhutan, and gives China access to the so-called Chicken's Neck, a thin strip of land connecting India and its remote northeastern regions.

India has said it warned China that construction of the road near their common border would have serious security implications.

In a separate statement, China's Defence Ministry said China had shown goodwill and that its forces had exercised utmost restraint, but warned "restraint has a bottom line" and that India must dispel any illusions.

Despite China's numerous diplomatic representations, its foreign ministry said, India has not only not withdrawn its troops but has also been making "unreasonable demands" and is not sincere about a resolution.

"If India really cherishes peace, it ought to immediately withdraw its personnel who have illegally crossed the border into the Indian side."

Indian Prime Minister Narendra Modi is to visit China early in September for a summit of BRICS leaders.

Indian officials say about 300 soldiers from either side are facing each other about 150 meters (yards) apart on the plateau.

Both sides' diplomats have quietly engaged to try to keep the stand-off from escalating, and that India's ambassador to Beijing is leading the effort to find a way for both sides to back down without loss of face.

Chinese state media have warned India of a fate worse than the defeat it suffered in a brief border war in 1962.

China's military has held live fire drills close to the disputed area, and state television on Friday said more exercises had been conducted recently, though did not give an exact location.

The official China Daily said in a Friday editorial that China was not in the mood for a fight, noting how the standoff has been "unusually restrained".

"However, if good manners do not work, in the end, it may be necessary to rethink our approach. Sometimes a head-on blow may work better than a thousand pleas in waking up a dreamer," the English-language paper added.