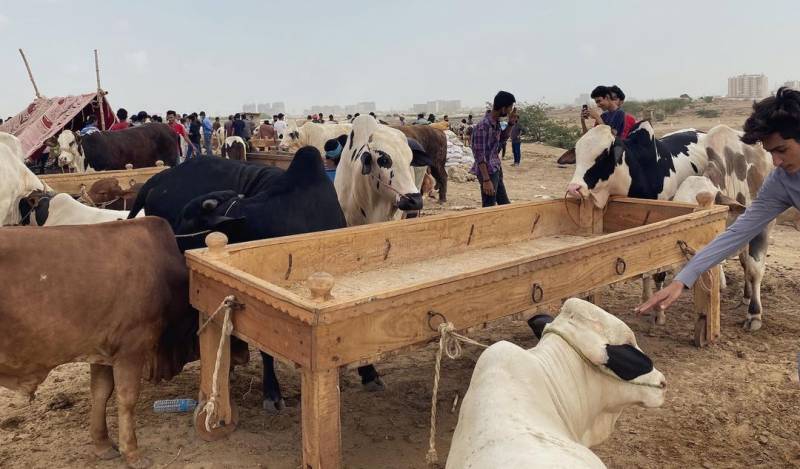 The coronavirus cases witnessed a spike in the mid of June, with officials fearing that the infections would spread further due to shopping and the celebrations leading up to Eidul Azha.

In a notification, the NCOC noted that Eidul Azha will be observed on July 10.

"Being a significant religious event/congregation; Eidul Azha prayer and Qurbani assume greater importance under the current Covid situation in the country," the notification said.

As per the NCOS guidelines, Eid prayers will be organised in open spaces "under stringent Covid protocols".

In case of a compulsion to offer prayers inside mosques, all the doors and windows should remain open for ventilation.

It also recommended that two to three prayers be organised at one venue with staggered timings so that maximum people can attend it with Covid precautions.

"All ulemas leading the Eid prayers should be sensitised to keep sermons short so that people don't have to stay in closed spaces for a longer period of time," it added.

The elderly, sick and young children have been discouraged from attending congregation because they are more vulnerable to getting infected.

The NCOC said that no one will be allowed to enter mosques without masks. There will separate entry and exit points at the venue to avoid "jumbling up of individuals" and hand sanitiser dispensers will be installed.

The forum further instructed mosques to ensure social distancing of at least six feet between worshippers to avoid physical contact. People should also refrain from shaking hands or hugging each other to avoid the chances of disease transmission, it added.

Meanwhile, people have been encouraged perform ablution at home and bring their own prayer mats to the mosques.

Gathering after the prayers have been discouraged and people have been advised to immediately disperse after the congregation.

Moreover, the government has encouraged people to opt for collective Qurbani this year through public, private and community organisations and ensure the implementation of precautionary measures.

For this purpose, ulema and religious scholars have also been told to encourage people for collective and "online Qurbani".

Furthermore, the provinces will be initiating awareness campaigns to educate the masses on the spread of the virus during meat distribution.

The NCOC said that the site of slaughtering should be at a distance from residential areas and be a vast open space. Crowding at the site should be avoided and only a limited number of people would be allowed.

Earlier in the day, Minister for National Health Services Abdul Qadir Patel expressed the commitment to ensure compliance of health guidelines to avoid the spread of COVID-19.

Talking to the media persons in Islamabad on Tuesday, he said it is the matter of life of the people and every possible step will be taken for their protection from this disease. He said that the NCOC and the National Institute of Health (NIH), are fulfilling their responsibilities in this regard.

On the other hand, the number of confirmed COVID-19 cases in Pakistan are slowly increasing as 653 new infections were reported in the country.

As per data shared by the NIH, 18,950 coronavirus tests were conducted across the country during last 24 hours.

No new death was reported from the disease while at least 162 patients were on critical care across the country.

The positivity ratio stood at 3.45% on Tuesday.