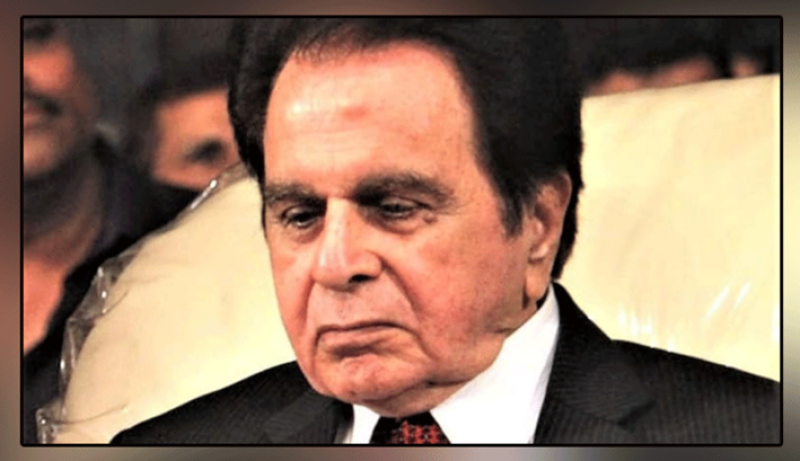 Mumbai (Web Desk): Legendary Bollywood actor Dilip Kumar passed away on Wednesday at the age of 98.

In a post on Kumar's official Twitter, his family friend Faisal Farooqui wrote, “With a heavy heart and profound grief, I announce the passing away of our beloved Dilip saab.”

With a heavy heart and profound grief, I announce the passing away of our beloved Dilip Saab, few minutes ago.

We are from God and to Him we return. - Faisal Farooqui

The legendary actor was admitted to Mumbai's Hinduja Hospital after complaining of breathlessness, it was the second time he had been hospitalised in the same month.

Born on December 11, 1922 in Peshawar (now in Pakistan) as Mohammad Yousuf Khan, he began his film career in 1944 with Jawar Bhata.

Nicknamed “The Tragedy King”, Kumar played the lead in some of the Indian film industry's most commercially successful films of the period, earning him iconic status.

He won hearts with his spectacular performance in some of Indian cinema's most iconic and landmark films including Naya Daur, Mughal-e-Azam, Devdas, Ram Aur Shyam, Andaz, Deedar, Daagh, Azad, and Ganga Jamuna.

Among his most remembered roles was in the historical romance Mughal-e-Azam, based on the life of one of the sub continent's great Mughal princes.

The movie, released in 1960, was eight years in the making and cost a mind-boggling Rs15 million, but soon became one of Bollywood's biggest-grossing films of all time.

Kumar, who cited Hollywood greats Marlon Brando, Gary Cooper and Spencer Tracy as influences, later won acclaim in 1964 for the nationalistic "Leader", screened against a backdrop of recent wars against China and Pakistan.

He even took a five-year break after a string of flops, returning in 1981 with the hit "Kranti" (Revolution) and a part alongside Bachchan in "Shakti" (Strength) the following year, plus a string of character roles.

The film pioneer is survived by his 76-year-old wife, Saira Banu , a popular Bollywood star back in the 1960s and 1970s.

After a series of badly-received films, Kumar took up a more active role in politics in 1998 and worked to end the feuding between India and Pakistan.

The ancestral homes of Kumar and other actors in Peshawar suffered decades of neglect but efforts are being made to restore them as the city emerges from years of Islamist militancy.

Unlike many actors who appeared in hundreds of films, the versatile Kumar carefully selected roles which by Indian standards only increased his stature in the fiercely competitive industry.

In 2006 he accepted a lifetime achievement award at India’s National Film Awards in recognition of his contribution to Indian cinema.

Yet he still admitted that he was baffled at his success.

“Honestly, I’ve still to figure out how an intensely shy young man called Yusuf Khan became the actor Dilip Kumar,” he told The Hindustan Times in an interview to mark his 85th birthday.

Condolences started to pour in soon after the death of one of the greatest actors of the subcontinent.

Indian Prime Minister Narendra Modi said that Dilip Kumar will be remembered as a "cinematic legend".

Dilip Kumar Ji will be remembered as a cinematic legend. He was blessed with unparalleled brilliance, due to which audiences across generations were enthralled. His passing away is a loss to our cultural world. Condolences to his family, friends and innumerable admirers. RIP.

President of Pakistan Dr Arif Alvi, expressing grief and sorrow over the death of renowned subcontinent actor, said that Dilip Kumar was an outstanding actor, a humble man and a dignified personality.

Sorry to see Dilip Kumar (Yusuf Khan) depart from his worldly abode. An outstanding actor, a humble man, and a dignified personality. Condolences to the immediate family and his huge family of admirers. May his soul rest in peace. اِنَّا لِلّٰہِ وَاِنَّآ اِلَیْہِ رَاجِعُوْنَ

Prime Minister Imran Khan said that for his generation Kumar was the "greatest and most versatile actor".

"I can never forget his generosity in giving his time to help raise funds for Shaukat Khanum Memorial Trust Hospital when the project was launched," he said.

Apart from this, for my generation Dilip Kumar was the greatest and most versatile actor.

Leader of the Opposition in National Assembly and Pakistan Muslim League-Nawaz (PML-N) president Shehbaz also paid tribute to Kumar, saying that Peshawar's Yusuf Khan reigned for many years in Bollywood as Dilip Kumar and today, left the world in the form of a legend.

Pakistan, China always stood by each other in difficult times: FM Qureshi

Federal Interior Minister Sheikh Rasheed Ahmad said he found Kumar, in his encounters with the actor, a "charming personality".

Bollywood star Akshay Kumar said: "To the world many others may be heroes. To us actors, he was The Hero."

To the world many others may be heroes. To us actors, he was The Hero. #DilipKumar Sir has taken an entire era of Indian cinema away with him.

My thoughts and prayers are with his family. Om Shanti ???????? pic.twitter.com/dVwV7CUfxh

Actor Ajay Devgan recalled the many moments he shared with Kumar. "An institution, a timeless actor. Heartbroken," he said.

Shared many moments with the legend...some very personal, some on stage. Yet, nothing really prepared me for his passing away. An institution, a timeless actor. Heartbroken.