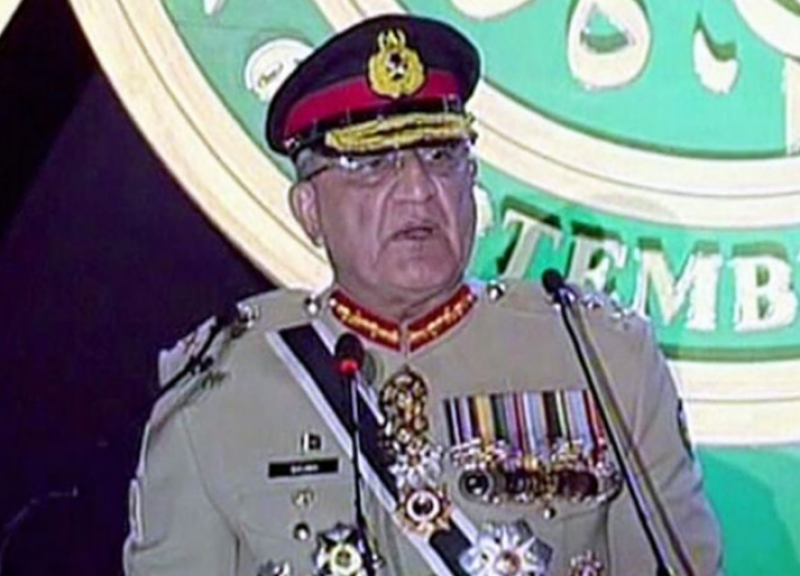 Addressing a ceremony in connection with Defence and Martyrs' Day held at the General Headquarters (GHQ) in Rawalpindi on Monday, the COAS said we have fought every enemy courageously and achieved self-sustainability in defence capabilities which made the country's defence impenetrable.

The army chief said the armed forces, with the support of the nation have achieved unprecedented successes in the fight against terrorism and in bringing normalcy to the country.

“There is no doubt that the relationship between Pakistan Army and the nation is the strong shield that has always defeated the enemy's black-handed tactics against the motherland,” the COAS said.

General Bajwa vowed that the armed forces will not hesitate for any sacrifice to protest the motherland, adding: "Our desire for peace must not be mistaken as weakness".

"The sacrifices of our martyrs are an expression of the same spirit of love for our homeland," he said. "Our elders lit the candle of freedom with their sacrifice, which faced severe trials from the beginning, be it 1948, September 1965, or the 1971 war, the Battle of Kargil or the long-running war on terror."

The COAS assured the families of the martyrs that the sacrifices of their loved ones will "never be forgotten."

The army chief said that Kashmir is a key issue between Pakistan and India, vowing to continue providing diplomatic, moral and political support to Kashmir.

Speaking about the Afghanistan situation, the COAS said that "we are keeping a close watch on the situation in the region, especially after the withdrawal of foreign troops from Afghanistan, where the situation provides an opportunity for peace and stability, as it is a prelude to further threats and difficulties."

The COAS said that inclusive setup in Afghanistan is expected and it will definitely change the fate of the war-hit country.

The nation observed Defence and Martyrs' Day on Monday with patriotic zeal and zest to pay tributes to the martyrs and Ghazis and reaffirm commitment to defend the motherland against all threats.

In their separate messages on the occasion of Defence and Martyrs Day, President Dr Arif Alvi and Prime Minister Imran Khan renewed the pledge that brave Pakistani nation will never compromise on its sovereignty, security and territorial integrity.