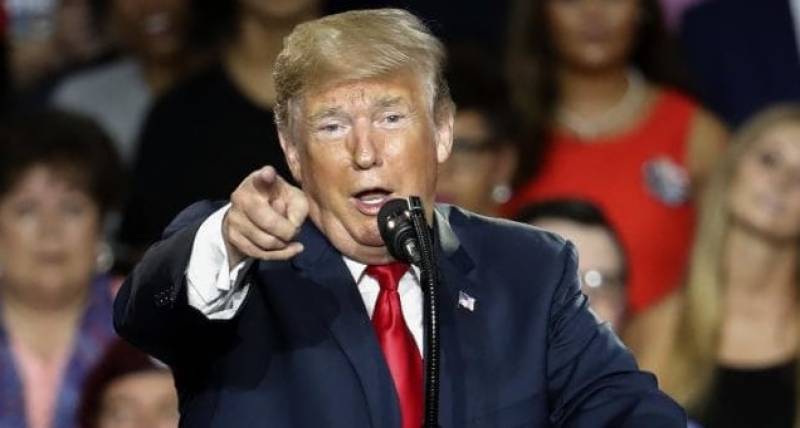 Washington (Agencies): US President Donald Trump on Tuesday said that the companies doing business with Iran will be banned in his country.

The statement comes as new US sanctions took effect despite pleas from allies of the US.

Washington had lifted sanctions on Iran in accordance with a 2015 international agreement that saw Tehran drastically scale back its nuclear programme.

Trump pulled the US out of the deal in May, ignoring opposition from Washington's main European allies Britain, France and Germany, as well as Russia and China.

European countries, hoping to persuade Tehran to continue to respect the deal, have promised to try to lessen the blow of sanctions and to urge their firms not to pull out.

But that has proven difficult: European companies have quit Iran, arguing that they cannot risk their US business.

"And it is not the first time that a warmonger claims he is waging war for 'world peace'," Zarif tweeted.

On Monday, Iran's Hassan Rouhani dismissed an offer for talks by Washington, suggesting that the US must return to the nuclear agreement before any negotiations.

“The European governments are still holding to the nuclear deal, but honestly their businesses are running from it as fast as they can so that the effect of the American sanctions really is proceeding regardless,” he said.

Few American companies do much business in Iran so the impact of sanctions mainly stems from Washington's ability to block European and Asian firms from trading there.

Among large European companies that have suspended plans to invest in Iran are France's oil major Total and its big carmakers PSA and Renault.

"We have ceased our already restricted activities in Iran in accordance with the applicable sanctions," said German car and truck manufacturer Daimler.

Global oil prices rose on Tuesday over concerns that sanctions would cut world supply, although the toughest measures targeting Iran's oil exports do not take effect for four more months.

Global benchmark Brent crude oil futures were 1.36 percent to $74.75 per barrel on Tuesday.

Britain, France, Germany and the EU as a bloc said in a joint statement on Monday: "We deeply regret the reimposition of sanctions by the US."

Meanwhile, Iraqi Prime Minister Haider al-Abadi sent a cryptic message on the Iran sanctions, saying that Baghdad opposes the measures, but will adhere to them.

"In principle, we are against sanctions in the region. Embargoes and sanctions destroy society without weakening regimes," he said at a news conference.