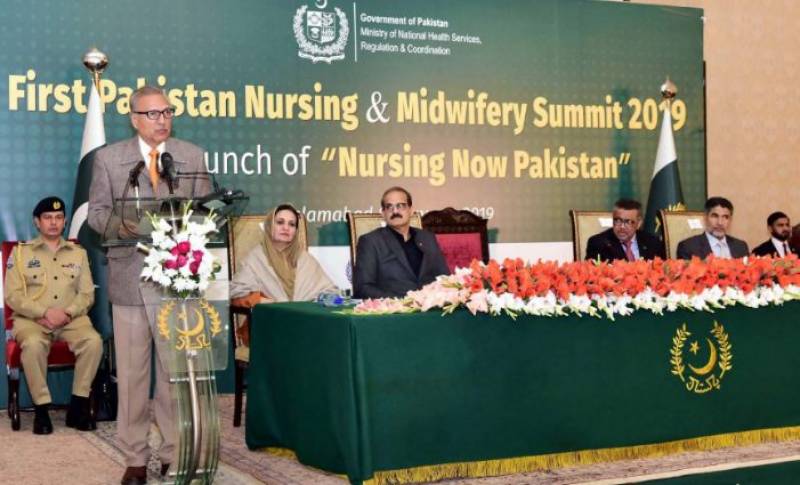 Addressing the annual Summit of Pakistan Nursing and Midwifery in Islamabad on Tuesday, the president said that the capacity building of Midwifery is among the priorities of the government to provide better health cover to the people.

President Dr Arif Alvi also launched 'Nursing Now Pakistan' which is part of Global 'Nursing Now campaign' in collaboration with the World Health Organisation (WHO) and International Council of Nurses, with the aim to prioritise the nursing sector and improve nurses` contribution in health sector through provision of an enabling environment.

The president said that the nursing diploma course will be replaced by nursing degree programme. "A national nursing university would be established in Islamabad to provide training to 25,000 people yearly", he informed.

Linking the issue of poverty with health, the president underlined the role of health professionals and nurses in alleviating the suffering of ailing humanity and cited certain challenges in the health sector including the issue of stunted growth.

President Alvi said that by observing the nursing year in Pakistan, the government would highlight the contributions made by the people associated with this field.

He said the government is committed to delivering results in the health sector in the years ahead.

The minister informed that a nursing university would be established on the land of National Institute of Health (NIH) and said shortage of nurses would be overcome.

Kiani also assured to resolve the issues confronted by nurses as it was the top priority of the government.