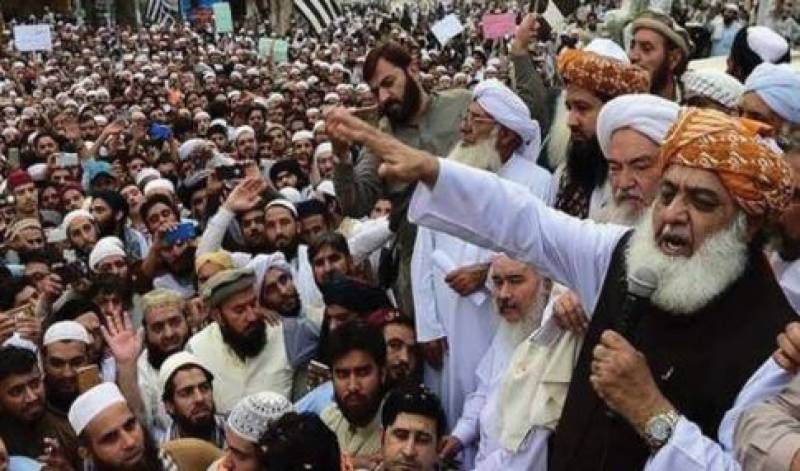 Addressing the participants of Azadi March on Thursday, JUI-F Chief Maulana Fazl-ur-Rehman said that the Pakistan Tehreek-e-Insaf (PTI) calls everyone a thief but itself is implicit in the foreign funding case.

Maulan Fazlur Rehman said that the PTI has given around 60 applications to plead exemption from appearance before the court.

He said that the opposition leaders do not want NRO from Imran Khan, instead they will not give it to him.

“Imran himself hid the money laundering by his sister through an amnesty scheme and now he speaks of granting NRO concessions,” the JUI-F chief said.

He said that the government has offered to make an inquiry commission to investigate rigging in elections.

“Everyone has witnessed that rigging… when the nation is a witness then it doesn’t need to be inquired further,” said Fazl.

Welcoming the statement by the DG ISPR regarding the Army being an impartial institution, the JUI-F chief said, “We don’t want to drag the national institutions in politics. You said that we are impartial so we welcome it.”

In his fiery address to the participants, Maulan Fazlur said the protesters won’t budge until PM Imran Khan tenders resignation.

“There is no need for talks with the government’s negotiating team if the demand of the prime minister’s resignation is off the table”, the JUI-F chief said.

Earlier on Thursday, a meeting of the Rahbar Committee of the opposition parties was held at the residence of Jamiat Ulema-e-Islam-Fazl (JUI-F) Akram Durrani’s residence.

The meeting was attended by Nayyar Bukhari, Farhatullah Babar, Ayaz Sadiq, Amir Muqam, Muhammad Tahir Bizinjo, Usman Kakar among others to review the current political situation and progress on talks with the government.

Addressing a press conference along with other members, Rahbar Committee convener Akram Durrani said that all the political parties have unanimously decided to increase pressure on the government.

He said that the Azadi March will take a new direction after two days. Durrani added that the committee was mulling over three recommendations. “The workers are determined, even willing to stay up to three months,” he said.

Speaking on this occasion, Pakistan People’s Party (PPP) leader Farhatullah Babar said that the opposition is putting the government under pressure, calling it ‘the first phase’.

Talking to newsmen before the meeting, Elahi said that that the government will continue to negotiate till the issue is not solved. “We are hopeful that we will reach a solution,” he said.

On the other hand, Defence Minister Pervez Khattak has rejected the impression of deadlock in talks with opposition parties, the Radio Pakistan reported.

The minister said government had offered opposition parties to bring evidence if they have any regarding rigging in last elections. He assured that a commission will be set up if opposition provides evidence of rigging.