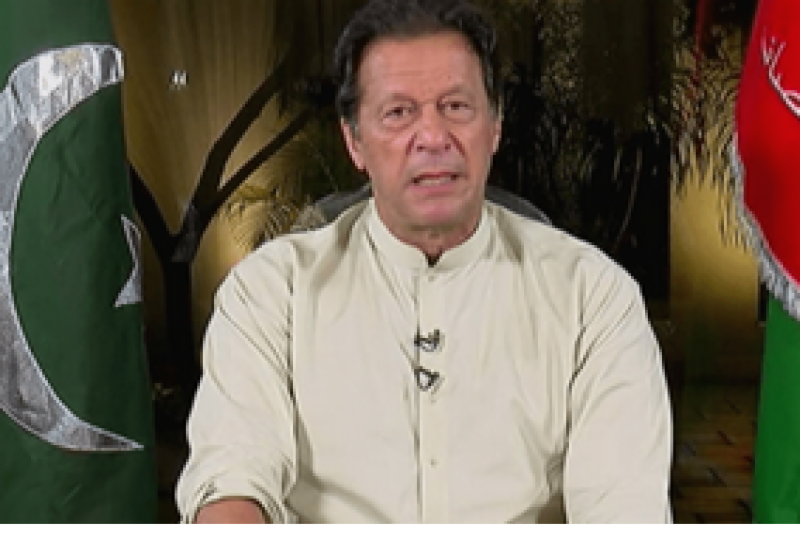 In his address via video link, the PTI chief vowed to fight for the “real freedom” of the country till his last breath.

The PTI chief said that he won’t step back and urged the nation to join PTI’s long march. “You have to win the war for the country’s future.

“I can only try but you have to participate because the future is your and your children’s future,” he said, stating that he will receive PTI supporters from across the country in Rawalpindi.

Imran Khan has claimed that the nation has lost trust in the institutions and all eyes were on the Supreme Court (SC) now.

The former premier said that what was happening in Pakistan today was "unimaginable even in western societies".

The PTI chief urged Chief Justice of Pakistan (CJP) Umar Ata Bandial to look into the matters of the FIR of attack on his container, the murder of journalist Arshad Sharif as well as alleged custodial torture of PTI Senator Azam Swati.

Imran Khan said that the “plan” to assassinate him was made in September.

“This incident […] no, this planned assassination attempt … I want to clear that this plan was made in September,” he said while addressing long march participants through a video. “On Sep 24, I said in a public rally that this plan was formed and that they will blame a religious fanatic [for it].”

Khan reiterated his allegations against Prime Minister Shehbaz Sharif, Interior Minister Rana Sanaullah and Maj Gen Faisal Naseer, claiming that they had planned to pin his murder on a “religious fanatic”.

“They planned that if a religious fanatic kills Imran, the responsibility from them will go away,” he said.

Earlier, the PTI resumed its long march to Islamabad on Thursday Wazirabad.

A large number of the party supporters gathered at the site where former premier Imran Khan was injured in a gun attack on November 3.

Addressing the gathering Shah Mahmood said , said that despite an assassination attempt, PTI didn’t bow or give up on its struggle for freedom.

He said that party chairman Imran Khan would soon join his supporters in the long march to Islamabad.

Speaking on the occasion, PTI's Secretary General Asad Umar said that no one could scare Imran Khan or his followers.

“Exactly a week from today, an attempt was made to take Imran Khan’s life […] but let me tell you today, it was not an attempt to take one man’s life, it was an attempt to silence the nation’s voice.”