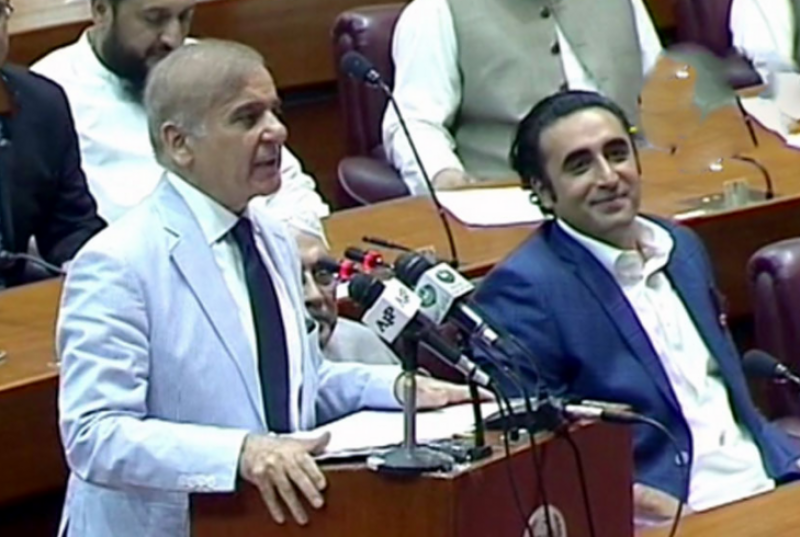 Delivering his maiden speech in the National Assembly after his election to the office of the prime minister, Shehbaz Sharif congratulated the Supreme Court of Pakistan for declaring the deputy speaker’s ruling unconstitutional and “burying the doctrine of necessity forever”.

Shehbaz announced that he would be soon arranging an in-camera session of the parliamentary security committee to ascertain the facts involved in the purported 'foreign letter' regarding alleged foreign conspiracy against Pakistan and interference into its internal politics.

The prime minister-elect in his speech said that a drama was staged in the country by the PTI and lies were churned over a purported foreign letter.

He expressed his wonder despite an announcement by the former speaker of the assembly, no one had brought the letter to him to see it.

"The country of 220 million people and the members of the parliament wanted to know the reality involved in this drama," he said, adding that the facts in the letter should be exposed before the nation and the world to end this debate.

Shahbaz Sharif said that as the prime minister, he would make arrangements to convene the in-camera security committee meeting in which a briefing would be given. Besides, other members, the top military and intelligence brass and Pakistan Ambassador would attend the meeting.

“On behalf of this House, I assure the nation that if any involvement is proved, I will not stay as prime minister for even a second and go to home after tendering resignation,” he declared.

Regarding the economy of Pakistan, Shahbaz said if Pakistan were to progress, then it needs to be self-sufficient on the financial front.

He said that the PTI-led government left the country’s economy in tatters with current account deficit and other economic indicators “worsening”.

Announcing the revival of the Benazir Income Support Card, He said that the poverty reduction program would be further expanded across Pakistan. Shahbaz mentioned that the happiness of the masses can be seen through economic indicators.

He also noted that the Pakistani currency regained its value, which was trading at Rs190 per dollar and closed at Rs182 per dollar today.

Criticising the PTI government over its foreign policy, he lamented that Pakistan's strategic partners and friends had left it while it remained silent on the Kashmir issue.

Underlining the importance of having good ties with China, he alleged that the previous government had attempted to weaken the friendship between Pakistan and China.

"But this friendship is for forever and ... I assure that we will make progress on the CPEC," he added, thanking Chinese President Xi Jinping.

He further underlined the significance of having good ties with Saudi Arabia, Turkey, European Union nations, the United Arab Emirates, Britain and Iran. He also said ties needed to be strengthened with US on the basis of equality and "we need to raise our voice for Afghanistan" where the situation was dire. "We want peace in Afghanistan."

Shehbaz also stressed the need to get the EU GSP Plus Status.

With regards to India, Shehbaz said while they wanted good relations with the neighbouring, it was conditional on the resolution of Kashmir issue.

"We will raise our voice for Kashmiri brother on every forum. We will give them diplomatic and moral support," he said, adding that his advice to Indian Prime Minister Narendra Modi was to realise that there "is poverty, unemployment and diseases on both sides of the border".

"Why do we want our coming generations to suffer. Come, let's resolve the Kashmir issue in line with United Nation resolutions and Kashmiris' expectations, so that we are able to end poverty on both sides of the border."

Shehbaz also expressed the resolve to raise voice for Palestinians.

Concluding his speech, he emphasised national unity, saying that a "nation is built through consensus".

It is pertinent to mention that Imran Khan became the first prime minister of Pakistan to be ousted from his office through vote of no-confidence on Saturday.