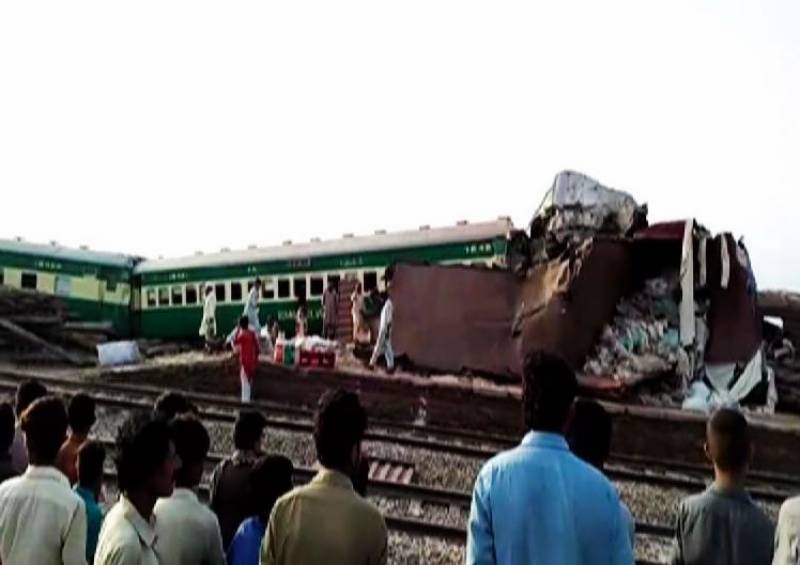 Rahim Yar Khan (Web Desk): At least 21 people were killed and several others injured when Quetta bound Akber Express collided with a goods train at Walhar Railway Station near Sadiqabad on Thursday morning.

According to details, a freight train was standing on the loop line when the passenger train collided with it instead of running on the mainline.

The local administration said that three to four bogies of the passenger train derailed while the engine of the train was completely destroyed.

District Police Officer (DPO) Rahim Yar Khan Umar Salamat said that the injured have been shifted to DHQ Sadiqabad and Shaikh Zayed Hospital Rahim Yar Khan for treatment. An emergency has been declared at the hospitals.

The DPO further said rescue operation is underway and hydraulic cutters have been called at the site to retrieve dead bodies.

Meanwhile, a control room has been established to provide necessary information to the victim families. The numbers of control room are 068-9230109 and 0300-9402579.

President Arif Alvi and Prime Minister Imran Khan expressed deep grief and sorrow over the loss of precious lives in the train accident.

In their separate messages, they directed to provide best possible medical treatment to the injured.

In a tweet, Prime Minister Imran Khan said he has asked Railways Minister to take emergency steps to counter decades of neglect of railway infrastructure and ensure safety standards.

Saddened to learn of train accident in Sadiqabad. My condolences to the victims families and prayers for the speedy recovery of the injured. Have asked Railways Minister to take emergency steps to counter decades of neglect of railway infrastructure & ensure safety standards.

Federal Minister for Railways, Sheikh Rashid Ahmad said that an investigation has been ordered into the unfortunate accident.

He said that the train accident occurred due to human adding that all assistance will be provided to the families of the deceased and the injured.

Kashmir issue can only be resolved through dialogue, says PM in Sri ...