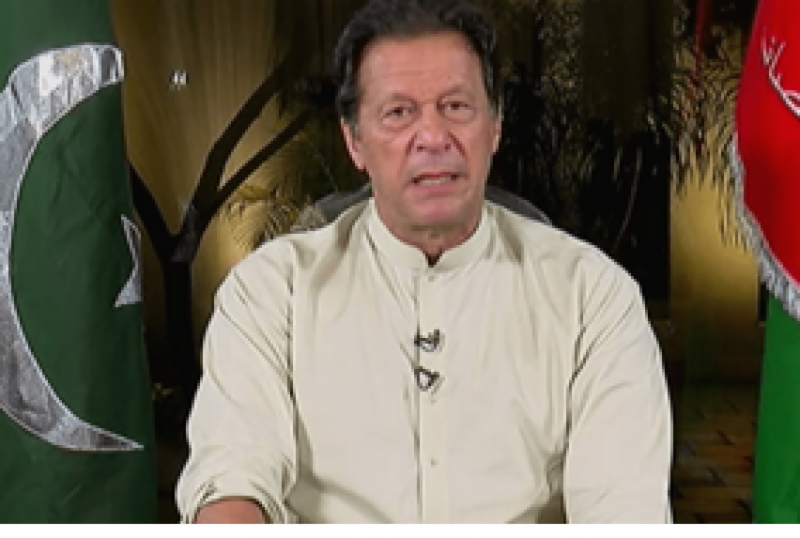 Addressing the gathering via video link from Lahore, the PTI chief said that “thieves” had come into power because of their “handlers”.

Imran Khan said that the PM Shehbaz Sharif went to London to meet a 'lying absconder'.

Lashing out at the Sharifs, the former premier said that the recent London visit was meant to discuss “the most important position in Pakistan”.

"This scenario could never occur in any civilised country as rule of law prevails," Khan said, adding that the corrupt are not facing the consequences as there is no rule of law in Pakistan.

“I can’t get a first information report registered as an ex-prime minister because a powerful person is in it,” he said.

Imran Khan said that “deals” were being made in the country with powerful criminals, adding that “no nation could progress without [ensuring] rule of law”.

The former prime minister said that the on the nation should participate in the PTI's long march for future generations.

“If we act like cattle, then God will let us remain like this,” Khan said, urging the nation to fight for their freedom and their rights.

He said that nations seldom had the chance to change their fate but said that now was the time for Pakistan.

Speaking to the media persons earlier in the day, Qureshi said that their FIR must be registered in the Wazirabad attack on the PTI chief and hoped that they will get justice.

"Everyone should be equal in the eyes of the law. The police should listen to our viewpoint," he said.

The PTI leader said that even though the party has a government in Punjab, they are still hopeless.

"This hopelessness tells that some people are above the law," he added.

The former ruling party resumed long march from Wazirabad on Thursday after a pause of one week.