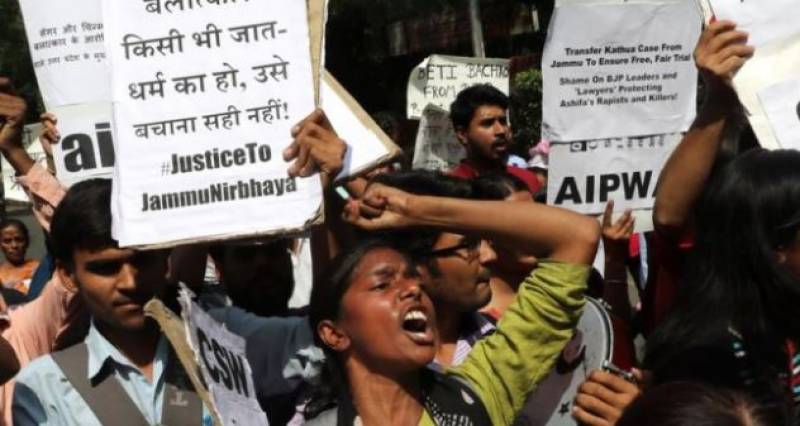 Srinagar (Web Desk): The brutal gang rape and murder of an eight-year-old girl in Indian-held Kashmir (IHK) has triggered nationwide outrage, inflamed communal tensions and shone a fresh critical light on the prevalence of sexual crimes.

Men killed eight-year-old Asifa Bano after raping her inside a temple in IHK, said a report by Special Investigation Team of Crime Branch, Jammu and Kashmir Police.

In January, eight-year-old Asifa Bano was grazing her horses in Harinagar district of IHK when she lost track of some of her horses. She enquired about their whereabouts from people nearby, when a man offered to help and took her to a nearby forest.

The man also called his friend to the jungle. She sensed that there was danger ahead, she tried to flee but one of the men grabbed the minor by her neck and forced her to swallow sedatives. The girl was dragged to a nearby temple, Devistan, and locked inside, the police said.

For the next three days, the two men tied the minor and took turns to rape her over and over before strangling her to death, according to the full text of charge sheet shared on First Post.

Crime Branch has filed a charge sheet against eight people including Sanjhi Ram, a 60-year-old retired revenue official and the alleged mastermind of the crime, his son Vishal Jangotra and his nephew who is allegedly a juvenile.

Meanwhile, defying threats and abuses, a female lawyer Deepika Singh Rajawat has embarked on an arduous journey to provide justice to Asifa Bano and appearing in court on behalf of the victim’s parents.