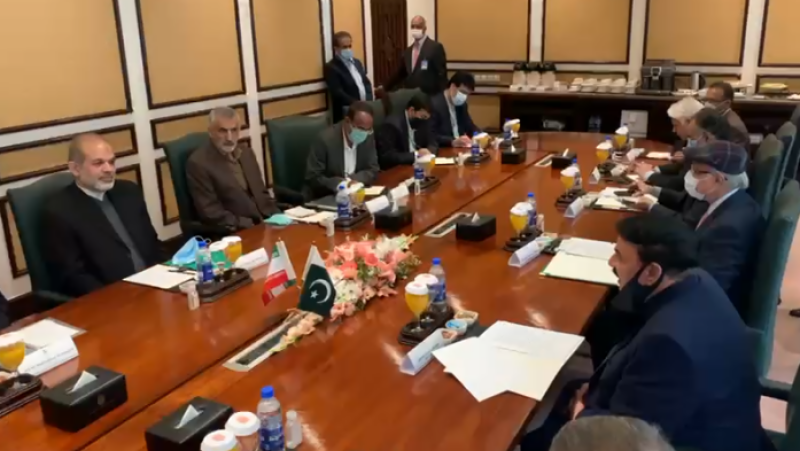 The understanding was reached in a joint declaration issued after the meeting of a nine-member visiting Iranian delegation led by Interior Minister Dr Ahmad Vahidi with Interior Minister Sheikh Rashid Ahmed in Islamabad, the Radio Pakistan reported.

The two sides agreed to set up markets on Pak-Iran borders and increase the number of border terminals.

They also exchanged views on completing fencing work on Pak-Iran border at the earliest.

It was agreed that the territory of Pakistan and Iran should not be used for terrorist activities against each other.

Ways to prevent illegal human immigration and drug trafficking were also discussed during the meeting.

He said the recent increase in terrorist incidents is regrettable and joint cooperation is needed to end it.

The interior minister said the international community should help the Afghan people as severe scarcity of resources could lead to a humanitarian crisis in that country.

Sheikh Rashid Ahmed said Pakistan would continue to play its positive role for lasting peace in the region and welfare of Afghan people.

Vahidi, along with his nine-member delegation, was received by his Pakistani counterpart Sheikh Rashid Ahmad at the Noor Khan Airbase, Rawalpindi.

“Received His Excellency Dr. Ahmed Vahidi, Interior Minister of Islamic Republic of Iran as he reached #Pakistan on a day visit,” Sheikh Rashid said in a tweet and added, “Matters of mutual Interest would be discussed at the delegation level meetings between Pakistan and Iran Interior ministries.”