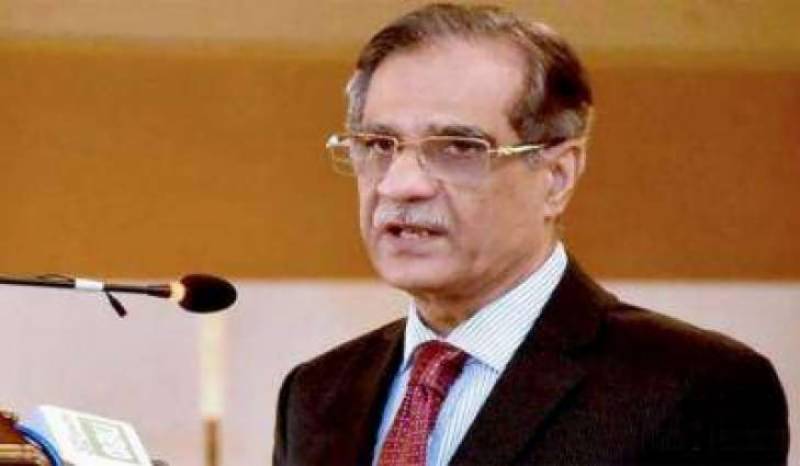 Lahore (Staff Report): Chief Justice of Pakistan Justice Saqib Nisar on Saturday warned of initiating high treason cases under Article 6 of the Constitution against those who will try to hinder construction of dams.

The lawyer of the federal government and Water and Sanitation Authority (WASA) appeared before the bench.

As the hearing went under way, the lawyer representing the federal government informed the court, “Mineral water companies are paying the government Rs0.25/litre and selling it at Rs50/litre.”

The lawyer on behalf of the managing director of WASA MD informed the court that the mineral water companies were extracting underground water for free before 2018.

The CJP remarked that the mineral water companies should determine a rate. “We will have to check if there are any minerals in mineral water,” he added.

Justice Saqib Nisar said he also boiled and drank tap water at home. “Even today, the poor are forced to drink water from ponds,” he said.

The CJP remarked that water is more expensive than gold and its theft will not be allowed anymore.

Justice Nisar said, “Let me tell you one thing, I have no other purpose than to serve the nation.”

"I will tell you one thing, I have no purpose except serving the nation," Justice Nisar said, adding that he would not be embarrassed in taking up any job for public welfare after retirement.

“I have started studying Article 6 of the Constitution and anyone who attempts to block the construction of the dam will be tried under it”, the CJP said.

The court then summoned chief executive officers of all mineral water companies and adjourned the hearing of the case till Sunday 11am.

On Friday, the chief justice took suo moto notice of mineral water companies using underground water for selling it in bottles during the hearing of a case pertaining to environmental issues facing the Katas Raj Temple.