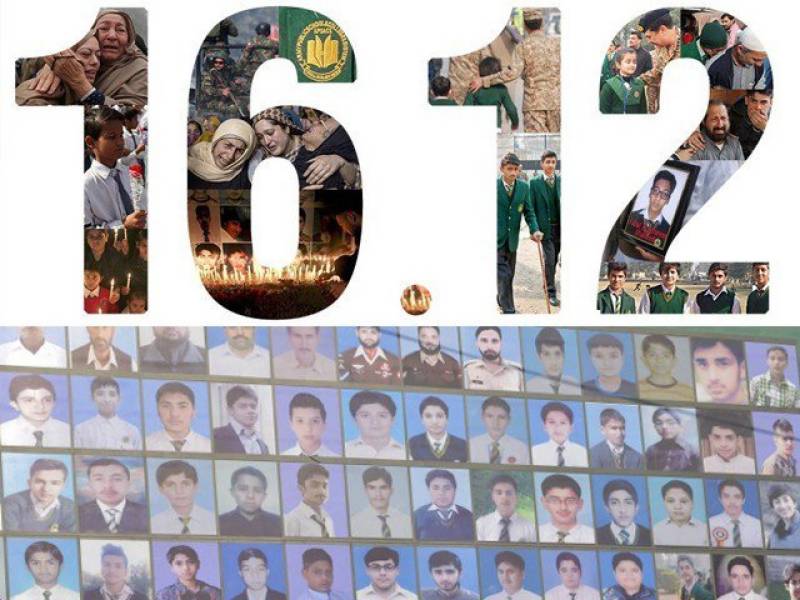 The portraits of the martyrs have been displayed on roads in Peshawar Cantonment and other parts of the provincial capital to pay tributes to them. An event would be held at the Army Public School & College (Boys) in Peshawar in memory of the martyrs. Corps Commander Peshawar, Lt Gen Nazir Ahmed Butt would be the chief guest on the occasion.

The families of the martyrs and some organisations have arranged Quran Khwani for the departed souls at their homes and different places in the provincial capital. A group of parents of the martyred students has announced a protest sit-in outside the Peshawar Press Club on the occasion of third anniversary of the terrorist attack to highlight their grievances and demands.

Security across the provincial capital has been upgraded to avoid any untoward incident. According to a senior police official, a number of search and strike operations were carried out all over Peshawar during the last few days to arrest suspects.

A total of 147 people, including 122 schoolchildren, were martyred when six militants attacked the Army Public School & College (Boys) in the Peshawar Cantonment on Warsak Road on December 16, 2014.

Not only the parents and close family members, but the friends of the martyred students and even the general public can never forget the smiling faces of the innocent students who became victim of the worst ever terrorist act in the country.

Many schools, roads and a park were named after the martyrs of the APS tragedy in Khyber Pakhtunkhwa, Fata, Punjab and Balochistan. People have placed huge billboards of many of these young souls in different parts of the city to pay tributes to them.

A National Action Plan was launched after the APS attack that led to improvement in the law and order situation in Khyber Pakhtunkhwa and rest of the country in recent years. According to the data of the KP Police, 2017 remained the most peaceful year in the last decade due to the actions taken by the police and security forces.