One of the biggest cricketing events in the country is just a month away. As teams finalize their rosters for the upcoming HBL PSL 6, fans of the teams are excited to know that what chances their favorite teams have in the 6th season. Cricket festivity will quadruple as soon as the tournament starts, let us examine all the HBL PSL Teams and their chances based on their final list of players. Firstly, in this article, we will be taking a look at Islamabad United. With a new coach, Johan Botha, team will look to improve their performances as they were last in the points table last season. With one of the successful teams in first 4 editions of PSL, Islamabad United (IU) will be searching for the right combination at the start of the tournament.

Let us examine what Islamabad United have in their bag

As far as the retentions are concerned, Islamabad United have tried to retain those players that have been associated from earlier days with the team. Likes of Shadab Khan, Hussain Talat, Musa Khan, Zafar Gohar, Asif Ali and Faheem Ashraf had started their PSL careers with IU and all of them have been able to represent Pakistan based on those performances. In addition to that, two foreign players; Colin Munro and Alex Hales have also been retained. Munro is a T20 impact player and has been retained having decent PSL 5. Munro scored in excess of 200 runs with an average of 35 and strike rate of 140 in 8 matches. Alex Hales was one of the major retentions, he was traded back with Colin Ingram going back to Karachi and Hales to IU. Openers were a missing link this year for IU as Ronchi isn’t available, therefore, a strong opening stand is required for which Hales is brought in. Alex Hales was with Karachi last year and played outstandingly well in which he scored 272 runs with an average of 45.33 and a strike rate of 148. He was also in the top 6 hitters of the tournament with 12 sixes in 9 matches.

Now let’s take a look at the picks in draft, some of the gun players recruited are Hasan Ali, Lewis Gregory, Reece Topley and Chris Jordan (supplementary). Although, some of the surprise picks were Iftikhar Ahmed, Rohail Nazir, Phil Salt, Lewis Gregory and Iftikhar Ahmad. Talking of the overall look of the team, Islamabad looks a pretty decent team with covering majority of their basis.

One of the areas of improvement for Islamabad United were their bowling in the powerplay and in the end. Highest number of wickets were only 9 and that too were by Shadab Khan, none of the other bowlers were able to get more than 9 wickets. Economy rate of all the bowlers were above 9, although, the league had an economy rate of 8.5 overall. Keeping in mind the bowling disasters, IU has drafted in Hasan Ali, Reece Topley, Muhammad Wasim Jr, Akif Javed and Chris Jordan. Accompanying them will be retained players, Faheem Ashraf and Musa Khan.

IU had not retained any of the wicket keeping options, therefore, they had to pick at least one wicket keeper as well. They went for 2 options including local and foreign with the likes of Rohail Nazir and Phil Salt. IU has done pretty well in the all-rounder’s category too with Shadab leading the pack followed by a long list of all-rounders including Hussain Talat, Faheem Ashraf, Zafar Gohar, Lewis Gregory, Iftikhar Ahmad, Chris Jordan and Ahmed Safi Abdullah. Batting has been pretty decent in last tournament as well in which Munro, Shadab, and other top order had a decent run. At present, Asif Ali and Hussain Talat have been in the form of their life in the ongoing domestic tournaments, whereas, Munro and Hales are hitting hard consistently in Big Bash which could make IU’s batting quite long and threatening for the opponents. Spin bowling is also addressed which includes 2 Left-Arm spinners, Zafar Gohar (recently debut for Pakistan) and Ahmad Safi (34 wickets in 10 matches in QET); 1 Off-spinner in Iftikhar Ahmad and leading the team is the leg spinner Shadab Khan.

The most likeable factor of IU is that they not only have a strong first XI but they also have like for like replacement options, such as, Gregory for Jordan, Rohail Nazir for Phil Salt, Bowling option of Reece Topley and Spin options as mentioned above. With decent enough choices and availability of players in the squad, IU looks pretty good to go on at least till the play-off’s stages. As far as the team on paper is concerned, we rate them to be counted upon top 3 teams in the tournament.

Potential First XI of IU could be as follows:

However, following can prove to be match winners for IU 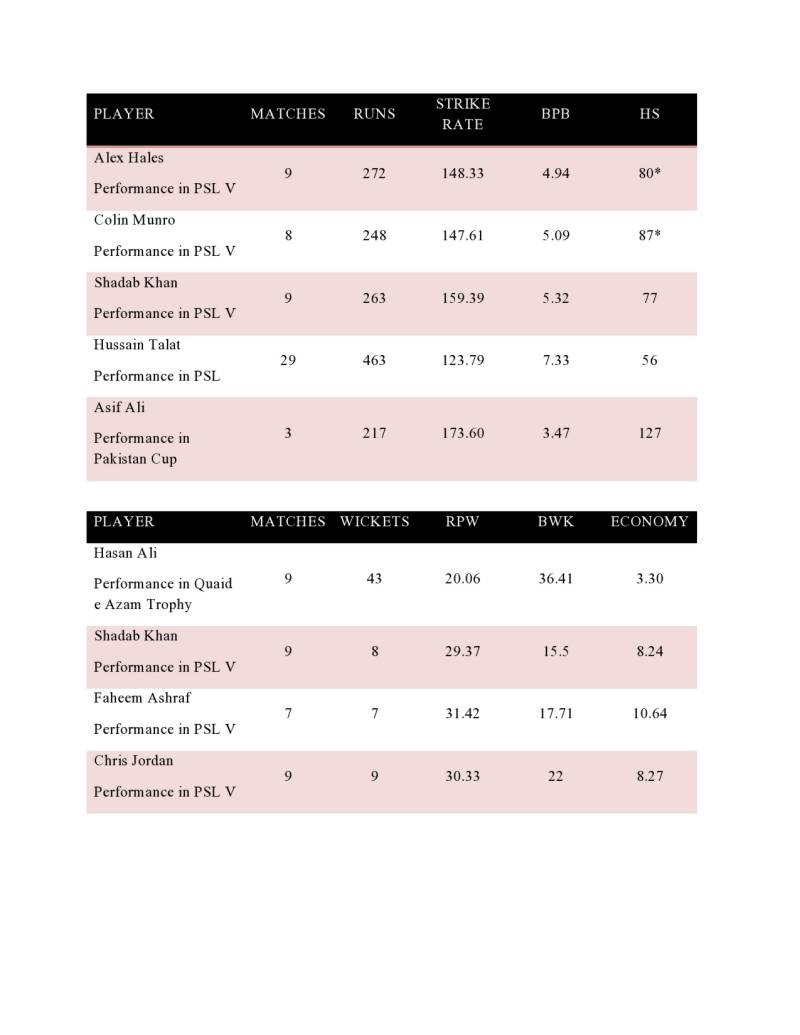