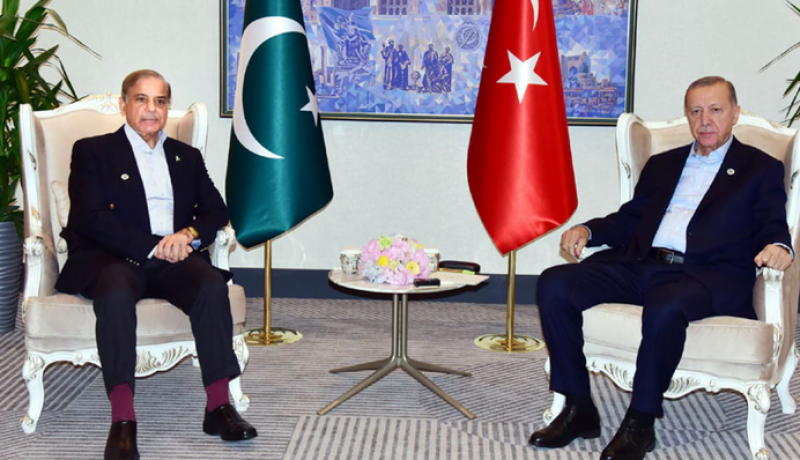 Samarkand (Web Desk): Pakistan and Turkiye have decided to continue high-level exchanges to further enhance the multi-dimensional strategic relations between the two countries.

The decision was taken during a meeting between Prime Minister Muhammad Shehbaz Sharif and Turkish President Recep Tayyip Erdogan on the sidelines of SCO Summit in Samarkand.

PM Shehbaz extended his gratitude to President Erdogan and to the people of Turkiye for their solidarity and generous support in the wake of devastating floods in Pakistan, caused by climate change.

Highlighting close fraternal ties between the two countries, the prime minister underscored the importance of various bilateral institutional mechanisms, in particular the High-level Strategic Cooperation Council (HLSCC), which serves as the leadership-level platform to provide strategic direction to this abiding partnership.

While welcoming the recent signing of “Trade in Goods” agreement between both countries, the Prime Minister expressed the confidence that optimal utilization of the agreement would boost bilateral trade and act as a catalyst in further cementing bilateral economic and investment relations.

The two leaders decided to maintain close contact and continue high-level exchanges to further enhance the multi-dimensional strategic relations between Pakistan and Turkiye.

Meanwhile, Prime Minister Shehbaz Sharif and President of Azerbaijan Ilham Aliyev held a meeting on the sidelines of the SCO-CHS meeting in Samarkand on Friday.

PM Shehbaz underlined the importance of unlocking the existing potential in the relationship by boosting bilateral engagement in the fields of trade, investment, agriculture, information technology and tourism.

He expressed his gratitude to Azerbaijan for its support and solidarity with Pakistan as well as provision of generous financial assistance for the flood affected people.

PM Shehbaz highlighted that the massive natural disaster caused by climate change called for urgent action by the international community to address this global threat.

He said that Pakistan and Azerbaijan had exemplary relations, deeply embedded in common history, faith and culture.

The premier reaffirmed Pakistan’s principled support to Azerbaijan on Nagorno-Karabakh and congratulated on the historic success in liberation of its occupied territories.

He also expressed condolences on the recent martyrdom of 71 Azeri servicemen in an unprovoked attack by Armenia.

PM Shehbaz reiterated support for Azerbaijan’s right to self-defence in accordance with international law and in protection of its territorial integrity.

Both leaders extended an invitation to each other for visits at an early date.