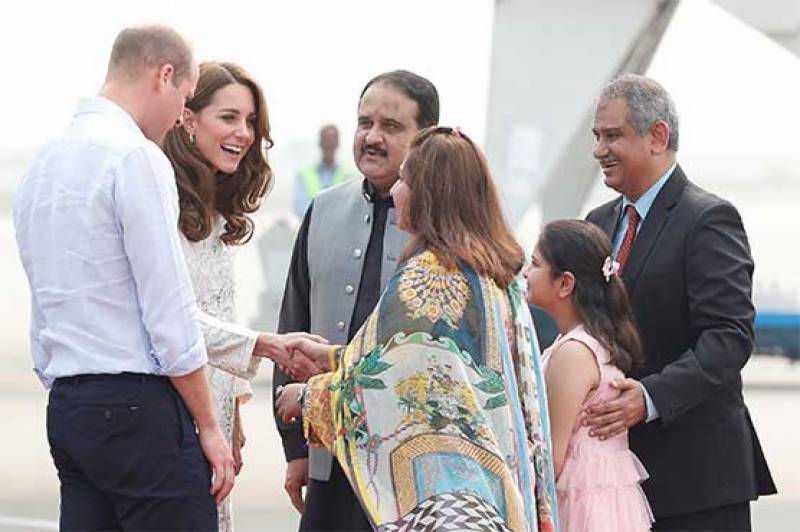 Lahore (Staff Report/Agencies): The Duke and Duchess of Cambridge Prince William and Kate Middleton have arrived in Lahore today (Thursday).

On day four of their five-day visit, the couple will visit the SOS Children’s Village, the National Cricket Academy and Shaukat Khanum Memorial Cancer Hospital and Research Centre.

Today The Duke and Duchess of Cambridge will visit the bustling city of Lahore, known widely across Pakistan as the country's city of culture!@UKinPakistan #RoyalVisitPakistan pic.twitter.com/c9xqrOiQUw

They will also visit the Mughal-era Badshahi mosque – the second largest mosque in Pakistan.

The Duke and Duchess will meet Punjab Chief Minister Usman Buzdar and Governor Chaudry Sarwar during the reception.

A dinner reception will be hosted in honour of the royal couple at the Governor House.

On Wednesday, the Royal couple arrived in Chitral on the third day of their five-day visit to Pakistan.

On arrival, they were received by area notables and high officials.

Both of them were worn the traditional Chitrali cap and Cloak on the occasion.

The Royal couple reviewed damages occurred by the floods in the district and impact of climate change on melting of glaciers. They also took an aerial view of Hindukush and Himalaya mountain ranges.