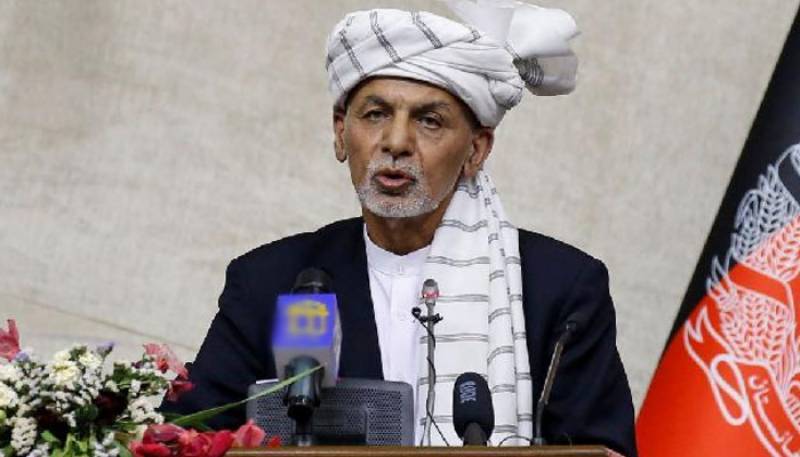 Abu Dhabi (Web Desk): The United Arab Emirates (UAE) on Wednesday said that it had "welcomed President Ashraf Ghani and his family into the country on humanitarian grounds".

"The UAE Ministry of Foreign Affairs and International Cooperation can confirm that the UAE has welcomed President Ashraf Ghani and his family into the country on humanitarian grounds," read a brief statement on the ministry's website.

The statement was published by the UAE's state-run WAM news agency on but it did not say where Ghani was in the country.

It remained unclear whether Ghani flew directly to the UAE or was at another location since he left Kabul on Sunday, just as the Taliban approached Kabul.

Ghani's whereabouts have been the subject of much speculation since he fled from Afghanistan on Sunday, as the Taliban entered capital Kabul.

On Sunday when he fled the country, Ghani had said he was leaving to “prevent a flood of bloodshed”, as the Taliban entered the capital, capping a lightning offensive across the country.

Ghani had said he believed “countless patriots would be martyred and the city of Kabul would be destroyed” if he had stayed behind.

Meanwhile, foreign media reported that Afghanistan was contacting the Interpol and asking it to arrest Ashraf Ghani.

According to Forbes, the Afghan embassy in Tajikistan made the demand on charges of Ghani "stealing from the country’s treasury".

On Monday, the Russian embassy in Kabul had said that Ghani fled the country with four cars and a helicopter full of cash and had to leave some money behind as it would not all fit in.

On August 16, the Taliban had declared the war in Afghanistan over after taking control of the presidential palace in Kabul.

Spokesperson for the Afghan Taliban Mohammad Naeem said that the group desires peaceful relations with the world.

Naeem said the group respect women’s and minorities’ rights and freedom of expression within Sharia law.

“We do not think that foreign forces will repeat their failed experience in Afghanistan once again,” the spokesperson said and added, “We are ready to have a dialogue with all Afghan figures and will guarantee them the necessary protection.”

On August 17, Taliban spokesperson Zabiullah Mujahid on Tuesday said that the Islamic Emirate does not have any kind of any kind of hostility or animosity towards anybody.

Addressing a first press conference in Kabul since the Taliban overthrew of the Afghanistan government, he said that that the group does not wish to "repeat any conflict, any war". He added that all animosity "has come to an end".

Earlier in the day, the Taliban also declared a general amnesty for all government officials and urged them to return to work.