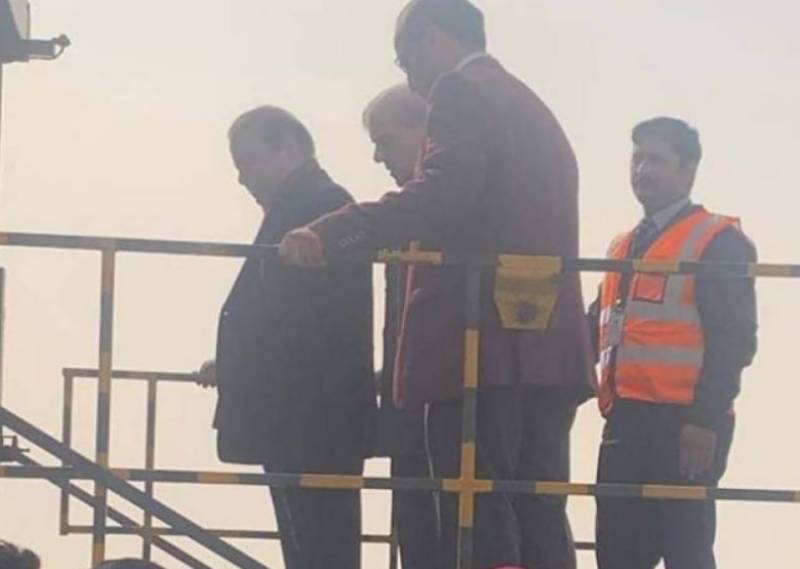 According to details, the air ambulance, equipped with an intensive care unit and an operation theatre will travel to London via Qatar.

As per the PML-N sources, Nawaz Sharif is likely to go to the US after going through a detailed checkup in London.

Meanwhile, PML-N spokesperson Marriyum Aurangzeb in a separate statement said that doctors completed a medical examination of Nawaz ahead of his departure and he was administered high doses of steroids and medicines to ensure that his condition remains stable during travel.

Nawaz's medical files were handed over to the team traveling with the former prime minister in the air ambulance.

Earlier, Nawaz Sharif’s mother, his daughter Maryam and other family members bid farewell to the former PM at his residence in Jati Umra.

A large number of PML-N workers had gathered outside former PM’s house since morning prior to his departure. They accompanied Nawaz’s vehicle during his trip to the airport from Jati Umrah.

On Monday, the interior ministry gave permission to Nawaz Sharif to travel abroad for medical treatment in accordance with the verdict of the Lahore High Court (LHC), while keeping his name on the Exit Control List (ECL).

The ministry issued a memorandum after receiving the court order.

In its notification, the ministry reproduced the undertakings provided by Shehbaz Sharif and Nawaz to the court in which the terms of their travel and return have been laid out.

On November 16, the LHC allowed Nawaz Sharif to travel abroad for four weeks for medical treatment, saying the duration could be extended upon doctors' recommendation.

“As soon as doctors abroad permit [Nawaz to return], he will come back to the country without wasting a moment,” said the handwritten undertaking submitted by the PML-N legal team to the court. "Nawaz Sharif will return and face the cases against him in court," it added.