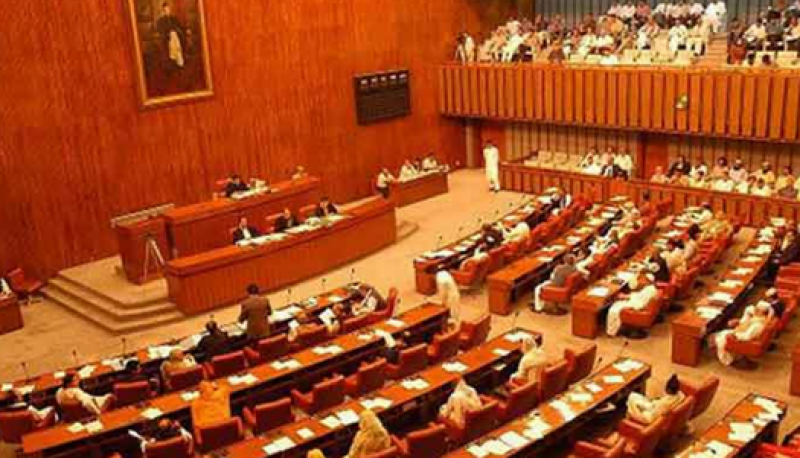 Islamabad (Web Desk): The upper house of the Parliament, Senate, on Friday passed four bills, including the Protection of Journalists and Media Professionals Bill 2021 and the National Accountability (NAB) Amendment Bill 2021 despite Opposition lawmakers’ protest.

According to details, The Protection of Journalists and Media Professionals bill was introduced by Federal Minister for Human Rights Dr Shireen Mazari. The bill was passed after 35 votes were given in favour of the bill while 29 voted against it.

Minister for Law Dr Farogh Naseem presented the NAB Amendment bill, which was approved by the upper house.

An independent group led by Senator Dilawar Khan also supported the government in its bid to have the bill passed.

Agitated over the proceedings, the opposition surrounded the speaker's dais, chanted slogans and tore up copies of the agenda. The session was later prorogued.

The Opposition protested against the government's move to include the bill as an additional item in today's agenda, as Opposition lawmakers shouted "Rubber Stamp Parliament unacceptable".

Senate Chairman Sadiq Sanjrani was forced to adjourn the session after Opposition lawmakers, incensed at the bills being approved, surrounded the Speaker's dias and tore copies of the day's agenda.

On November 17, the Joint Sitting of the Parliament also passed The Elections Second Amendment Bill, 2021, granting the right of vote to overseas Pakistanis and providing for use of Electronic Voting Machines (EVMs) in the elections.

According to details, Advisor to the Prime Minister on Parliamentary Affairs Dr Babar Awan piloted the bill in the House and the motion to consider the bill was passed with majority vote.

As per the bill, the Election Commission of Pakistan (ECP) shall, with the technical assistance of National Database and Registration Authority (NADRA) and any other authority or agency, enable overseas Pakistanis in prescribed manner subject to secrecy and security to exercise their right to vote during the general elections.

The bill also authorizes the ECP to procure electronic voting machines for casting of votes in general elections.

The bill provides for the right of review and reconsideration in the matter of Indian spy Kulbhushan Jadhav to give legal effect to the judgment of the International Court of Justice.

The Indian spy had been sentenced to death by a court in Pakistan back in April 2017.

A total of 221 lawmakers voted in favour of the motion while 203 lawmakers opposed it.

The opposition, in protest, tore copies of the day's agenda and walked out of the session in protest.

Following the protest, leaders of opposition parties gathered in the chambers of Leader of the Opposition in the National Assembly (NA) and Pakistan Muslim League-Nawaz (PML-N) President Shehbaz Sharif to ponder over a future course of action.

Addressing the media outside the Parliament House, Shehbaz Sharif had said the day would be remembered as the "blackest day in the history of the parliament".