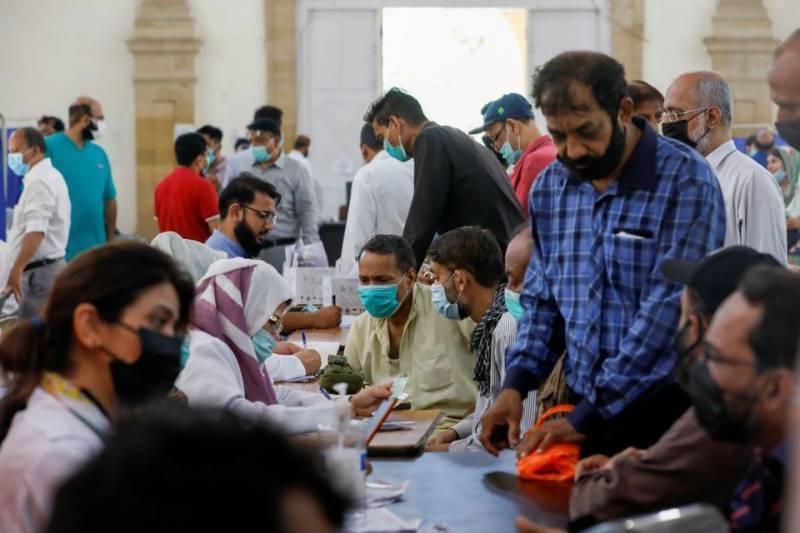 Lahore/Quetta/Karachi/Peshawar (Staff Report/Agencies): The number of confirmed COVID-19 cases in Pakistan rose to 1,345,801 on Thursday after 6,808 new cases surfaced in the country during the last 24 hours.

As per the National Command and Operation Centre (NCOC) data, 58,943 tests were conducted in last 24 hours while positivity ratio remained 11.55%.

According to the government's COVID-19 portal, the death toll related to coronavirus has reached to 29,042 with 5 fatalities reported during the last 24 hours.

Over the last twenty four hours, total number of recovered COVID-19 patients across the country reached 1,265,665 after another 426 virus recoveries were reported.

Meanwhile, the NCOC on Wednesday announced new restrictions in cities with an over 10% COVID-19 positivity ratio as the country battles the fifth wave of the deadly pandemic.

The decisions were taken during an NCOC meeting in Islamabad with Federal Minister for Planning, Development, and Special Initiatives Asad Umar in the chair.

The current situation of the coronavirus across the country and the implementation of precautionary measures were reviewed.

New curbs on schools, gatherings and other sectors were decided during the meeting. These include new restrictions for the wedding sector till February 15.

A complete ban on indoor weddings has been imposed, while outdoors weddings have been restricted to 300 fully vaccinated individuals.

On the direction of provincial government, Reach Every Door (RED) phase-II campaign is also in full swing.

The teams of the health department are vaccinating various people on the spot and also issued notices to unvaccinated people.

It is pertinent to mention that the global coronavirus cases have reportedly surpassed 339,666 million and death toll tops 5,584,394.