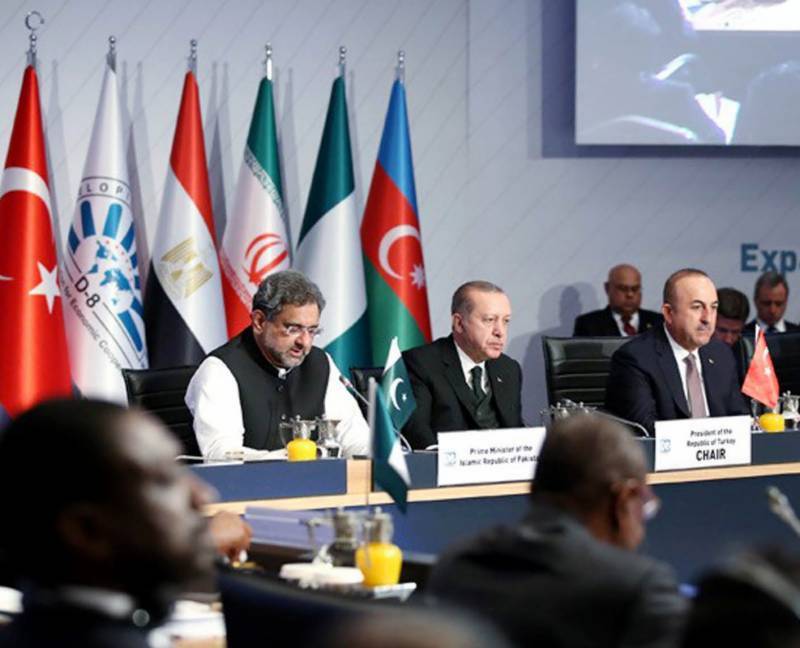 While, addressing the opening session of the summit in Istanbul on Friday, the premier sought enhanced trade and economic partnerships with D-8 member states.

Prime Minister Abbasi noted that as Pakistan celebrated 70 years of its independence, it was confronted with many challenges over the last decade.

“We faced unrelenting terrorism emanating from instability in our neighbourhood and the environment in the region and beyond.”

He, however, stressed that as a result of a comprehensive strategy and unwavering resolve, Pakistan had successfully turned the tide.

“Improved security has led to economic recovery. Pakistan’s economy has recorded a significant revival in the past four years. Over this time, we have focused on upgrading our communications and energy infrastructure, and enhancing regional connectivity,” he claimed.

The Prime Minister expressed that the China-Pakistan Economic Corridor would further put the economy on an upward trajectory of robust growth.

He appreciated the theme of the summit "Expanding Opportunities through Cooperation" and said it is in complete harmony with the post-2017 development agenda, visualizing sustainable development as one of the core elements of people-centric development.

Earlier, the Summit has adopted the Istanbul Declaration 2017 and the D-8 Istanbul Plan of Action to inject further dynamism into the pace of progress of the Organization.

Abbasi who is representing Pakistan in the Summit handed over the chairmanship of D-8 organization to Turkey.