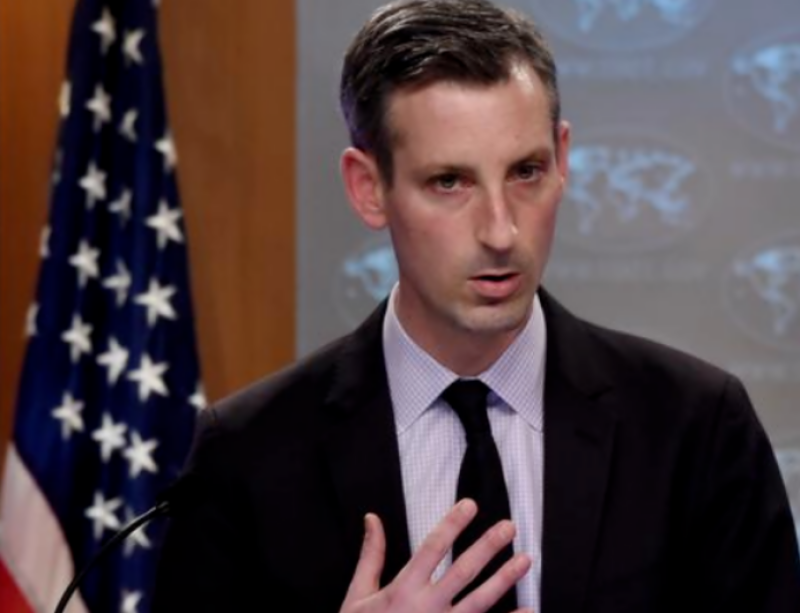 Washington (Web Desk): Spokesperson of the United States (US) Department of State Ned Price on Friday said that Congresswoman Ilhan Omar's visit to Pakistan was not 'sponsored' by the US government.

The State Department spokesperson made the statement during a press briefing while responding to a question from a journalist.

"As you are well aware that Imran Khan is still blaming US for his ouster from PM’s office while he’s also asking his supporters to keep protesting outside the White House. But yesterday Congresswoman Ilhan Omar met with Mr. Khan in Islamabad. It was kind of an hour-long meeting. Close associates of Mr. Khan claim that United States trying to clear the air with Mr. Khan. Is it true that Ilhan Omar is representing Biden government there in Islamabad," the journalist had asked.

"Well, as I understand it, Representative Omar is not visiting Pakistan on US government-sponsored travel, so I’d need to refer you to her office for questions on her travel," Ned Price said.

Congresswoman Ilham Omar is on a four-day visit to Pakistan till April 24. On Wednesday, the first day of her visit, She met some members of the Pakistani leadership including President Dr Arif Alvi, Prime Minister Shehbaz Sharif and Pakistan Tehreek-e-Insaf (PTI) Chairman Imran Khan.

Ilhan's meeting with Khan had also triggered a debate on social media as the PTI chief had been blaming the US for plotting his ouster from the office through a no-confidence motion.

On Thursday, she had visited Azad Jammu and Kashmir and met the region’s leadership.

In her meeting with AJK President Barrister Sultan Mahmood Chaudhry, the US lawmaker said that she has voiced her concerns over human rights violations in Indian Illegally Occupied Jammu and Kashmir and would take up the issue with the US Congress as well as the Biden administration.

Ilhan Omar's visit to AJK had drawn a strong reaction from India, with New Delhi claiming that her visit was to “practice her narrow minded politics” in the US.