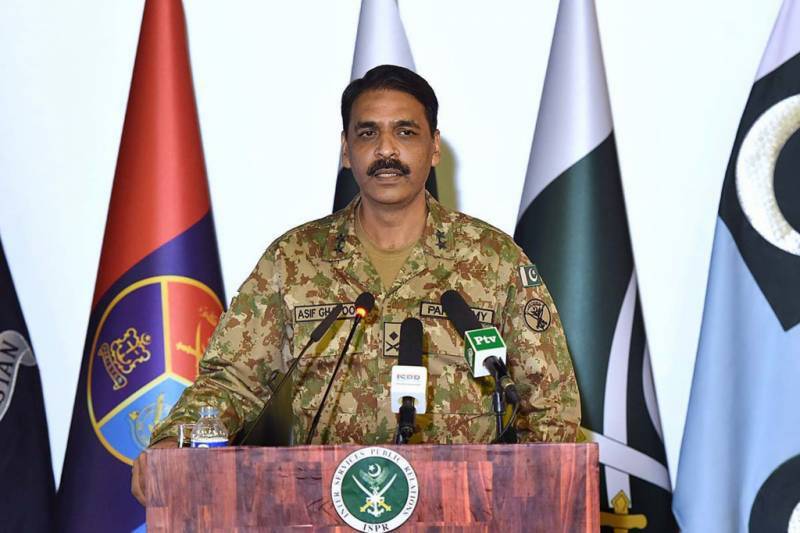 While addressing a press conference here on Friday, DG ISPR refuted reports regarding Pakistan preparing for war, but said that if India initiated any aggression, it would not be able to surprise Pakistan.

"There were lots of issues that I wanted to talk about today," Asif Ghafoor said: "But due to the situation after Pulwama, I will [only] be talking about that.

"Right after the attack, India started raining accusations on Pakistan without thinking and without any evidence. Pakistan has, this time, taken out some time to respond.

"Pakistan is not preparing for war. Threats and reports of a war are coming from your side. We are only using our right to self defence," he addressed Indian leadership's threats of waging war on Pakistan.

"We do not wish to go to war but please be rest assured should you [India] initiate any aggression, first you will never be able to surprise us. But let me assure you, we will surprise you. We shall also dominate the escalation ladder. Never think due to our commitments elsewhere we will have any capacity lack," the DG ISPR warned.

DG ISPR insisted, “Pakistan has attained this peace today after a lot of sacrifices and hardships and today, we are moving towards a better future.”

With regards to the book which former Inter-Services Intelligence (ISI) chief Lt-Gen (retd) Asad Durrani has co-authored ‘The Spy Chronicles’ with AS Dulat, the former chief of India’s spy agency Research and Analysis Wing (RAW), Asif Ghafoor said Durrani was found guilty of violating the military code of conduct.

“He has been found guilty of violating the military code of conduct. His pension and other benefits have been stopped,” he added.

The ISPR chief said that two senior military officials are under arrest for espionage and the army chief has ordered their court martial. The two officials in question “are not part of a network,” he clarified.