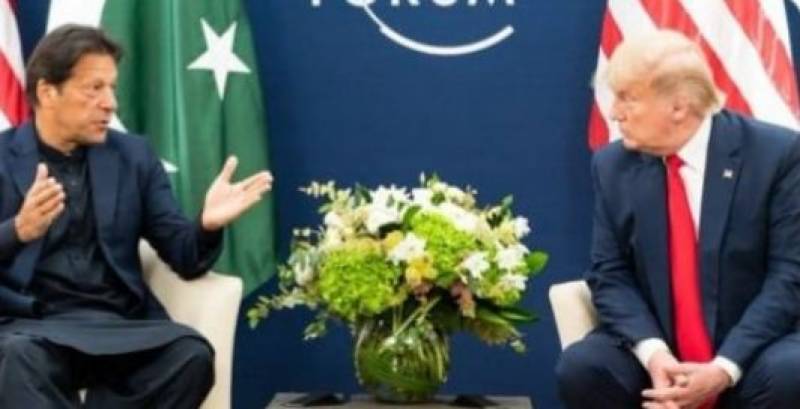 The foreign minister stated that the meeting between the US president and PM Imran on the sidelines of the World Economic Forum in Davos was very constructive which lasted for about an hour.

FM Qureshi said that PM Imran informed President Trump over the steps taken by Pakistan regarding the Financial Action Task Force (FATF) and asked for US support on the matter.

The prime minister also discussed the situation in the Indian occupied Kashmir (IOK) and the US president assured that he would discuss the issue.

President Trump also expressed his concerns over the situation in the occupied Kashmir and said that issue should be resolved, Qureshi added.

The FM said that the prime minister also asked the US president about improvement in the travel advisory and also discussed the trade between the two countries.

It was agreed during the meeting that a US trade delegation would visit Pakistan, he added.

Qureshi said that the US was also informed about Pakistan’s concerns over the issue of Iran and the negative impacts it could cause upon Pakistan.

The Afghan issue and moving the process of peace and reconciliation forward also came under the discussion, he added.

The president expressed his confidence and liking for the prime minister, he said, adding the meeting took place in a very cordial manner which was also attended by the members of the US delegation.

Meanwhile, Prime Minister Imran Khan said that Pakistan will not become part of any conflict in future as it has made a conscious decision to only partner with people in peace.

Addressing the "Pakistan Strategy Dialogue" on the sidelines of the World Economic Forum (WEF) in Davos, the prime minister said that both the Afghan jihad and the war against terrorism after 9/11 cost Pakistan heavily and inflicted a lot of damage to our society.

"The war on terrorism left our seventy thousand people dead but we have now dismantled the terrorist groups," Imran Khan said.

PM Imran said that said Pakistan played its part in trying to avert the conflict between Saudi Arabia and Iran. He said that Pakistan is also actively participating to facilitate the Afghan peace process.

"There is a chance of ceasefire in Afghanistan which will help us reach the Central Asian countries through the economic corridor," PM Khan added.

Alluding to the economic situation of Pakistan, the prime Minister said the first year remained focused on stabilisation measures which helped us significantly cut the current account deficit.

"This year, we want to grow our economy in order to provide jobs to our youth. We are doing everything possible to attract investment and incentivize the industries," PM Imran said.

Referring to the steps taken to remove hurdles in the way of investment, Khan said that the World Bank has improved Pakistan’s ranking for ease of doing business. "Our foreign investment in one year jumped 200 percent,"he said.

Highlighting the tourism potential of Pakistan including its centuries old civilisation, Imran Khan said that Pakistan is one of the most undiscovered countries in the world. He said we can strengthen our economy by tapping the true potential of tourism.

"Several world institutions have declared Pakistan as one of the most exciting tourism destinations," he said.

PM Imran said that tourism in Pakistan doubled in one year as a result of steps taken by the incumbent government.