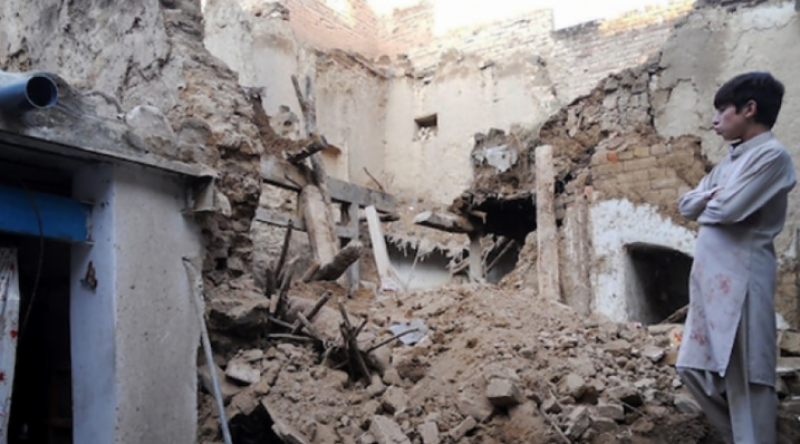 Kabul (Web Desk): At least 1000 people were killed and scores injured in a 6.1-magnitude earthquake in east of Afghanistan on early Wednesday.

As per the US Geological Survey (USGC), the earthquake struck about 44 km (27 miles) from the city of Khost, near the Pakistani border.

Authorities had launched a rescue operation and helicopters were being used to reach the injured and take in medical supplies and food, Ayubi added.

Photographs on Afghan media showed houses reduced to rubble and bodies covered in blankets on the ground.

Immediately after the earthquake was reported, the government of Pakistan extended condolences and sympathies over the loss of lives and damage to property in the neighbouring country.

Prime Minister Shehbaz Sharif expressed condolences over the lives lost in the earthquake.

In a statement, the premier said that Pakistan stands with Afghan brothers and sisters in this difficult time.

He said that Pakistan will provide all possible assistance to the people of Afghanistan.

PM Shehbaz directed the authorities concerned to assist the affected people in Afghanistan.

Deeply grieved to learn about earthquake in Afghanistan, resulting in loss of innocent lives. People in Pakistan share the grief & sorrow of their Afghan brethren. Relevant authorities working to support Afghanistan in this time of need.

Meanwhile, the Foreign Office (FO) stated that the government and people of Pakistan extend deepest condolences and sympathies over the loss of precious lives and damage to property.

"The people of Pakistan stand in strong solidarity with their Afghan brethren in this difficult time. We have no doubt that the brotherly Afghan people will overcome the effects of this natural calamity with their characteristic resilience," the statement said.

The FO added that Pakistani authorities and institutions are working to extend required assistance to Afghanistan in coordination with their relevant institutions.

Moreover, the World Health Organisation (WHO) has sympathised with families of those who lost their lives and livelihoods from the earthquake that affected some provinces of Afghanistan.

@WHO sympathizes with families of those who lost their lives & livelihoods from the #earthquake that affected some provinces of #Afghanistan. WHO Teams are on the ground to support immediate health needs, provide ambulance, medicines & trauma services & conduct needs assessment. pic.twitter.com/DSJUoTBO2W