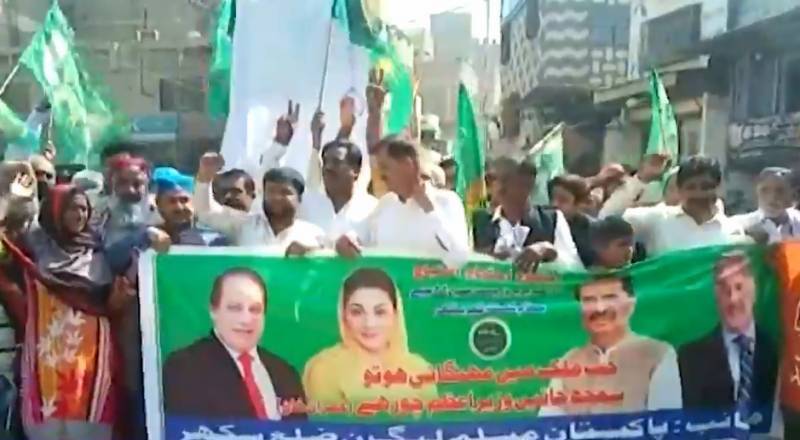 Islamabad (Web Desk): Opposition parties have launched protests in various cities across Pakistan protest against rising inflation in the country from today (Friday).

As per the reports, workers of opposition parties took to streets in several cities including Karachi, Lahore, Larkana, Sukkur, Jacobabad, Mohmand, Ziarat and Mingora.

People shouted slogans against the government and rising inflation. Traffic at the Quetta-Chaman highway remained suspended for several hours due to the rally.

In Karachi, the demonstration started near the Empress Market area, due to which the surrounding roads had to be sealed.

In Lahore, Pakistan-Muslim League-Nawaz (PML-N) staged a protest against inflation at the Jain Mandir Chowk while carrying utility bills and pieces of rotis (bread) in their hands.

In Mardan, protesters started gathering at the city's Kachehri Chowk, while in Gilgit, members of PML-N, as well as JUI, participated in the protest rally at Ittihad Chowk.

The members of the Jamaat-e-Islami (JI) also staged a protest in front of the Muzaffargarh Press Club during which they chanted slogans against rising prices of essential items.

Meanwhile, PML-N president and opposition leader in National Assembly (NA) Shehbaz Sharif on Friday appealed the nation to come out of their houses and participate in rallies against Pakistan Tehreek-e-Insaf (PTI) government.

In a statement, the PML-N leader said that economic condition of the country cannot be improved until we send this barbaric government packing.

Earlier in the day, PML-N issued a schedule of protest against PTI government in the wake of increasing inflation in the country.

The party sources stated that the PML-N will hold rallies in Khanewal and Sialkot on October 23 while protest will also be carried out in Gujranwala, Gujrat, Sahiwal and Multan on October 27.

It is pertinent to mentioned here that Pakistan Democratic Movement (PDM) is holding protest rallies nationwide against rising inflation.

On Friday, the demonstrations were held in various cities across the country including Lahore, Peshawar, Sargodha, Khushaab, Mianwali, Bhakhar, Jhang, Joharabad and others.