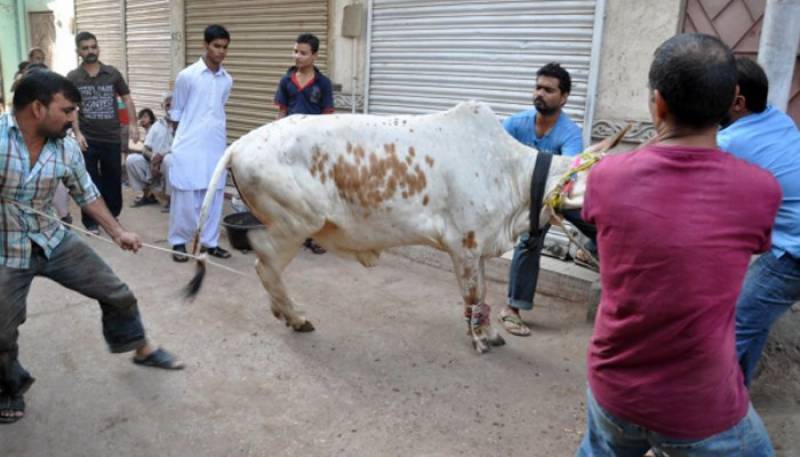 People, who could not sacrifice their animals on the first day of Eid, made arrangements on the second day to practice the ritual. Sacrificial meat was distributed among the relatives as well as the deserving people.

They also arranged food parties and prepared different kinds of dishes from the meat of their sacrificial animals.

People visited their relatives and friends to exchange Eid greetings with each other. Youth and children thronged parks and other recreational places.

On Wednesday, the first day of Eid-ul-Azha was celebrated with great religious fervor and solemnity across the country.

The day dawned with special prayers in mosques for well-being of Muslim Ummah and safety and security of the country.

The local authorities have also made special arrangements for disposal of offal and other solid waste during three days of Eid .

Eid-ul-Azha is celebrated on the 10th day of Zil-Hajj, which is the last month of the Islamic calendar and marks the start of the Hajj pilgrimage. It commemorates Prophet Ibrahim's (AS) willingness to sacrifice his son to show obedience to God. More than two million Muslims performed Hajj in Saudi Arabia.

On Sunday, pilgrims started gathering in Mina valley, on the outskirts of Mecca, for the start of the Hajj. In temperatures reaching the 40-degree mark, these people perform rites in the Mina valley, mount Arafat and in Mecca. Male pilgrims wear two white unstitched pieces of cloth that cover their body, known as the 'ihram', while women wear loose fitted clothing. Pilgrims are not allowed to cut their hair, wear perfume, or engage in sexual acts. The ritual ends with men completely shaving their heads.

The climax of the Hajj includes the Eid al-Adha festival, which is one of Islam's two major festivals and involves the sacrifice of an animal, usually a sheep, goat, or cow. The five-day pilgrimage must be performed by all Muslims, who are financially and physically able, at least once in their lives.