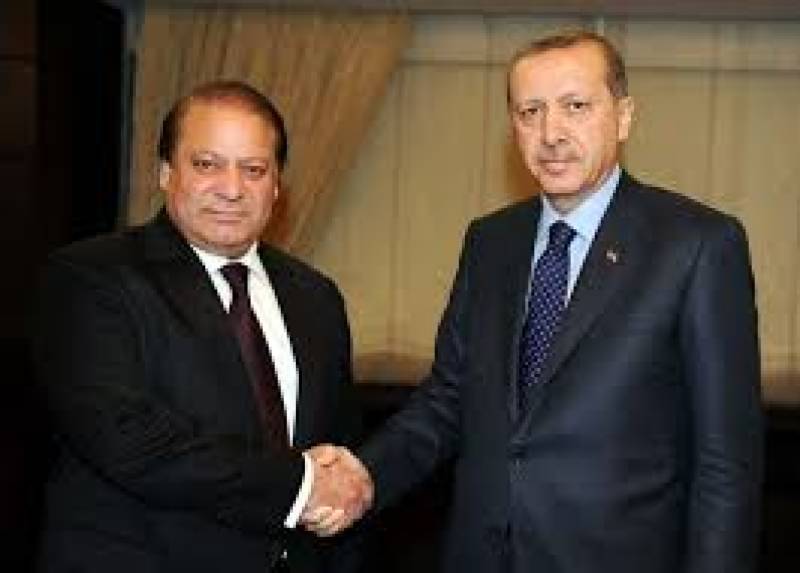 Ankara: Prime Minister Nawaz Sharif who is on a three day visit to Turkey has stated that Turkey’s enemy is Pakistan’s enemy since both the countries face common enemy. He said that whenever I visit Turkey it’s just like visiting my second home. He went on to say “Our common bonds of faith, culture and history continue to deepen and nurture this relationship”.

Addressing a joint press conference along with his Turkish counterpart Binali Yildrim, Prime Minister Nawaz Sharif stated Pakistan valued its relations with Turkey and was committed to the shared vision of a strong economic partnership.

Nawaz Sharif mentioned that the current trade volume between Pakistan and Turkey was less than $ 600 million, which was below its true potential.

However, he said efforts should be made to achieve the target of a comprehensive Free Trade Agreement (FTA) at the earliest possible.

Sharif said a comprehensive FTA would provide huge opportunities for different sectors of the two economies and maximize their trade potential in goods, services and investments.

Nawaz Sharif emphasized on frequent exchanges at the highest political level, terming these as hallmarks of their multi-faceted ties.

Turkish First Lady Emine Erdogan and Begum Kalsoom Nawaz also joined their spouses at the dinner, held at the residence of the Turkish President.

The prime minister who arrived in Turkey Wednesday afternoon participated in the fifth meeting of High Level Strategic Cooperation Council (HLSCC) on Thursday.

“The prime minister’s visit to Turkey and the convening of the 5th Session of HLSCC would further deepen the time-tested, unparalleled and historic ties between the two brotherly countries and would impart a strong impetus to their flourishing cooperation in diverse fields,” a Foreign Office statement said.

PM Sharif will also visit the Turkish Parliament to reaffirm Pakistan’s unequivocal support and solidarity with the Government and people of Turkey against the failed coup attempt in Turkey.