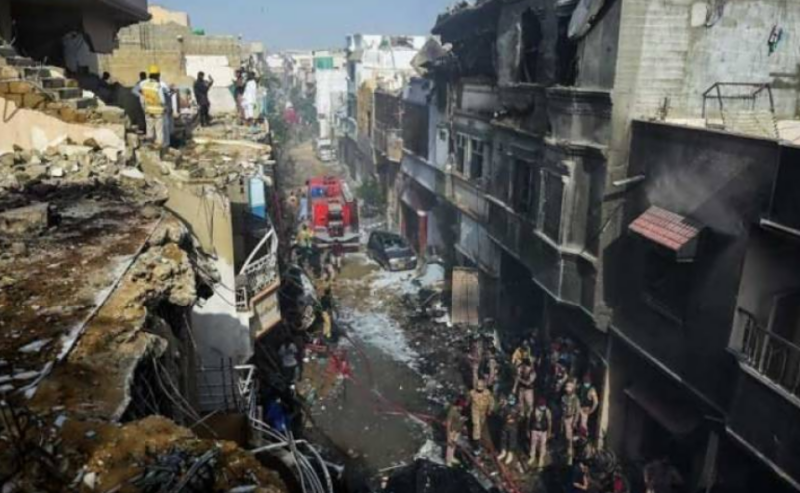 Karachi (Web Desk): The Sindh Health Ministry on Saturday confirmed that 97 bodies were recovered from the debris of the Pakistan International Airlines (PIA) passenger plane that crashed near the Jinnah International Airport in Karachi just a minute before landing on Friday.

According to spokesperson of the provincial health ministry, 66 bodies of the crash victims were shifted to Jinnah Post-Graduate Medical Centre (JPMC) and 31 dead bodies to Civil Hospital Karachi (CHK).

She said of that 20 bodies were of women and 43 of men. Three bodies of children had also been brought to the hospital.

The spokesperson ministry reported two survivors, adding that 19 bodies have been identified so far.

Ninety-nine were aboard the plane when it crashed into a narrow residential street, dealing significant damage to houses in a densely populated area. Thankfully, there were no deaths on the ground.

The PIA Engineering and Maintenance Department has also released an executive summary of the plane crash that occurred on Friday.

The plane made its final flight a day before the crash, when Pakistanis stranded in Muscat were brought back to Lahore.

The plane was checked last on March 21, 2020, and had operated eight times since then. It was last inspected in 2018. The aircraft was 16 years old and manufactured in 2004. The wrecked plane flew for a total of 47,124 hours, the summary stated.

According to Inter-Services Public Relations (ISPR), 25 houses in Model Colony, the site of the crash, had been cleared while a search and rescue operation was still underway. The residents had been accommodated at various places with the assistance of the civil administration, it added.

Meanwhile, a sample collection unit for DNA tests of plane crash victims and their families has been established at Forensic DNA Lab University of Karachi.

According to the Sindh Health Department, family members of the passengers of PK-8303 may visit for samples that would be required for cross match.

The Karachi Administration, PIA and Civil Aviation Authority (CAA) have announced telephone numbers for the families affected by the tragedy.

The Civil Aviation Authority (CAA) has also established a helpline that will remain functional round-the-clock to keep families updated.

Addressing news conference along CEO of PIA Air Marshal retired Arshad Malik in Karachi on Saturday, he said we fully share the pain and grief of the families of the deceased.

"No one can compensate the loss of human lives; however, government will expedite the process to award compensation of one million rupees to family of each victim", he said.

Ghulam Sarwar Khan said that compensation will also be given to those, whose properties, including houses or vehicles were damaged in the incident after, proper assessment.

The minister said it will be ensured that at least a provincial investigation report of the incident comes within three months.

He assured that there will be an independent, free, and fair inquiry and any responsible, if found, will be taken to the task.

Ghulam Sarwar Khan said the Airbus company would conduct a counter-inquiry into the cause of the crash.

He assured the people that the government's inquiry would be "fair" and added that full efforts would be made to present the report to the nation and the Parliament "as soon as possible".

"Four experienced members of the Pakistan Air Force are part of the committee. They will make full efforts to present the facts."

The minister said the government would take "100 per cent" responsibility for any negligence that led to the crash. "Whoever is responsible, they will be made to resign."

Responding to a question, he said: "If the report says the PIA CEO showed negligence, he will resign. If it says we have shown negligence, then not only will we resign but also present ourselves for accountability."

Earlier, PIA CEO Arshad Malik said 21 dead bodies have been handed over to their relatives.

He said transparent investigation will be held into the incident. He said samples of DNA have been taken to identify the bodies.

On Friday, Prime Minister Imran Khan promised an "immediate inquiry" into the matter.

Following the premier's remarks, Minister for Aviation Ghulam Sarwar Khan had formally ordered an inquiry into the plane crash.

PIA CEO Arshad Malik, while addressing the press conference on Friday night, said that plane that crashed was "technically sound".

He said had said that the aviation ministry would oversee an inquiry into the incident and that his team stood with the government of Pakistan, the armed forces, and the National Disaster Management Authority (NDMA).

"The aviation ministry will oversee an inquiry into the incident. We want the inquiry report to be completed as soon as possible but we cannot say when. We do not wish to interfere with the inquiry in any way," Arshad Malik said.